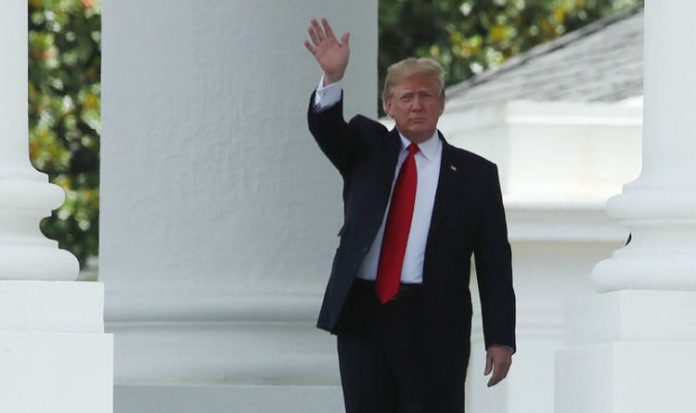 The US President will meet Theresa May, the Queen and more than 100 prominent business leaders during his four-day trip.

But thousands of protestors are set to march in the streets against Mr Trump, with officials fearful of how the notoriously volatile President will react to public criticism.

Activists have planned to stage protests against the outspoken president’s trip to the UK, his first since becoming president.

Sir Kim Darroch, the UK’s man in Washington, accompanied Mrs May when she became the first foreign leader to meet Mr Trump in the White House in January 2017.

And the ambassador is adamant Mr Trump’s first trip to the UK as President will strengthen the trans-Atlantic bond between the US and Britain, with some seeing French president Emmanuel Macron now as the US president’s fondest European friend.

Writing in the Sunday Telegraph, Sim Kim said: “President Trump will be an honoured guest, representing a partnership that is greater and deeper than any other in history.

“And in a world in which the challenges seem ever more daunting, I’m confident that the UK-US alliance will continue to play a leading role in advancing the values of democracy and freedom.”

Sir Kim underlined the close economic ties between the two countries, with a trade relationship worth £160 billion a year.

He pointed to the current US administratin’s “strong support for a bi-lateral trade agreement post-Brexit.”

Mr Trump is due to attend a meeting with business leaders at Blenheim Palace on his first night in the UK.

Last Saturday, American ambassador to the UK Robert Johnson revealed exclusively to the Daily Express that Mr Trump is keen on securing a trade deal with the UK post-Brexit.

And Sir Kim reiterated that despite policy differences on Iran and the hiking of US tariffs the UK and US governments special relationship remains strong.

He said: “Like all friends we disagree from time to time. But the relationship is so close and open that we can discuss these differences frankly.

“We urged the US to remain part of the Iran nuclear agreement and address its legitimate concerns by building on the deal, rather than rejecting it.

“Equally, we are disappointed by US tariffs on imports of British steel. But we will use our close relationship to try to resolve these issues.”