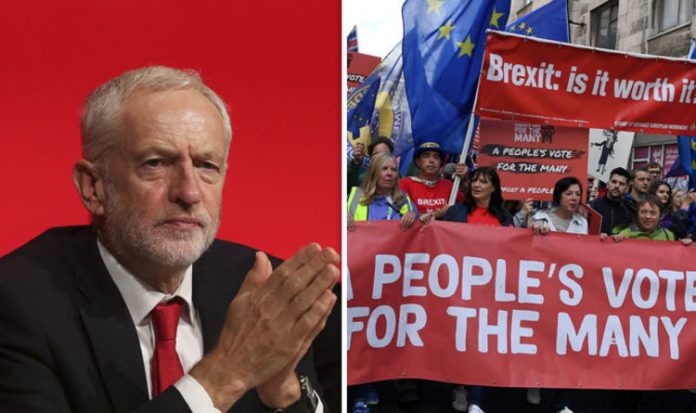 Jeremy Corbyn was forced into a convoluted compromise agreement last night as he came under pressure to back a new vote on EU membership.

The opposition leader has previously refused to publicly give his support to a “people’s vote” on Theresa May’s deal with the EU, arguing he would prefer a General Election if the Brexit agreement fails to pass through Parliament.

It is hoped the party will agree a unified position on the matter at its annual conference which is being held in Liverpool for the third time in eight years.

However, after a mammoth five-hour debate of party members and union delegates, Labour has decided to ask its members to back a complex motion which fails to rule out either a General Election or a new referendum.

The motion which delegates will vote on whether to support states: “If we cannot get a General Election Labour must support all options remaining on the table, including campaigning for a public vote.”

The compromise has been dismissed by some critics as a “disappointing fudge” which tries to balance the options of both Remain and Leave voters.

If agreed to by Labour conference delegates, the party will adopt a position that sees it continue to advocate an election but also prepare to support a new referendum.

Brexit has dominated the annual party gathering, with more than 120 local parties tabling motions on the subject.

Prior to the agreement on the motion, Mr Corbyn said he would give his backing to a second referendum if it was passed by delegates at the conference.

Speaking to the Sunday Mirror, Mr Corbyn said: “What comes out of conference I will adhere to.

“But I’m not calling for a second referendum.

“I hope we will agree that the best way of resolving this is a General Election.

“But I was elected to empower the members of the party.

“So if conference makes a decision I will not walk away from it and I will act accordingly.”

However, in a clear sign of splits within the party, Remain-backing union boss Len McCluskey has vented his frustration at the suggestion there should be a new vote on EU membership.

Unite union boss and Corbyn ally Len McCluskey told Pienaar’s Politics live from the Labour Party Conference: “The referendum shouldn’t be on ‘do you want to go back into the European Union?’”

When pressed by BBC 5 Live host John Pienaar, Mr McCluskey blasted: “The people have already decided on that.

“We very rarely have referendums in this country.

Labour delegates will vote on whether to officials adopt the “fudge” Brexit compromise as official Labour policy later this week.