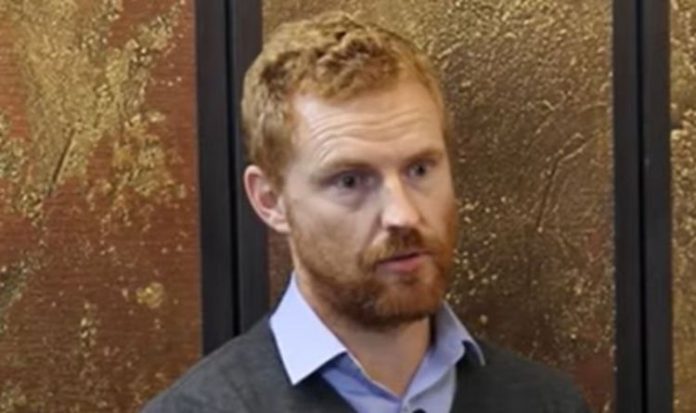 Jeremy Corbyn’s party pledged to hold a second referendum on Britain’s membership of the European Union if election. A number of prominent Labour figures, including Chancellor John McDonnell, indicated they would back remain in any second poll.

He said: “I think it was a disastrous policy.

“I think it was always going to result in Labour haemorrhaging millions of working-class votes and that’s exactly what it did.

“I think it was a disastrous policy” (Image: YOUTUBE/Triggernometry )

The Conservatives fought the 2019 election with a pledge to ‘Get Brexit Done’ (Image: GETTY)

“Actually, if you look at the data it’s pretty clear Labour lost more amongst leave supporters who had previously voted for Labour in the 2017 election than it did from remain voters.

“The idea that you could say to millions of working-class people that we though you got it wrong, and therefore we’re going to force you to take it again and there’s not going to be any kickback from that was completely naïve and they played a big price for it.”

Mr Embery, who used to work as a firefighter, is author of ‘Despised: Why the Modern Left Loathes the Working Class’.

The book, published last month, argues there has been a fundamental breach between the Labour Party and its traditional support base.

Boris Johnson won the 2019 general election by a landslide with a pledge to “get Brexit done”.

The Conservatives took seats in the north and midlands of England that had been held by Labour for generations.

Mr Embery campaigned enthusiastically for Brexit both before and after the 2016 referendum.

He argued there is a strong left-wing case for leaving the EU based around democracy and trade unionism.

The writer commented: “You get labelled with all sorts of things if you’re on the left and you’re against the EU.

“People think you’re a big fan of Nigel Farage or you’re in the same camp as the classical free market libertarians and actually there is a perfectly strong valid case for Euroscepticism from the left.

“It’s about democracy, it’s about accountability, it’s about being able to govern ourselves, it’s about looking at the EU and actually realising many of its laws and aims and objectives are inimical to the aims of trade unions and the left.”

Whilst Britain voted to leave the EU in June 2016 it didn’t take place until January of this year.

Currently the UK remains in a Brexit transition period, during which many of its rules are still made in Brussels and Britain must pay into the EU budget.

Mr Johnson is attempting to negotiate a new trade agreement with the EU for after this period finishes.

Britain officially left the EU at the end of January (Image: GETTY)

However, talks remain deadlocked over European access to British fishing waters and how far the UK can deviate from the EU’s ‘level playing field’ regulations.

Mr Embery condemned those who attempted to overturn the 2016 result commenting: “In a democratic society for a large part of the establishment, the political class, certain parts of the media class, big business etr, to do what they did to try to subvert that outcome was absolutely disgraceful and we shouldn’t forget what they tried to do.