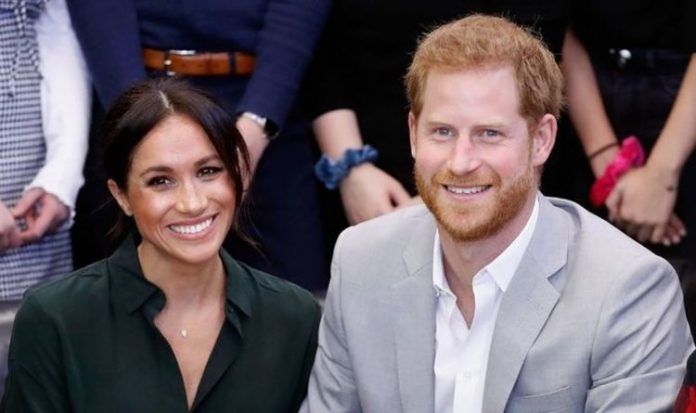 Meghan and Harry’s Christmas card has taken the internet by storm after being released just in time for Christmas. The sweet card features an artistic rendering of a picture.

The original shot was not taken by a professional but by Meghan’s beloved mother, Doria Ragland.

The Duke and Duchess of Sussex’s spokesperson said of the picture: “The original photo of the family was taken at their home earlier this month by The Duchess’s mother.”

In the picture, the Duke and Duchess of Sussex cuddle their son Archie, who displays a mane of red hair just like his father.

Their two dogs, Guy and Pula, are in front of the family.

The happy family is next to a cottage-like playhouse, adorned with Christmas decorations.

One-year-old Archie, who in the picture appears to be wearing jeans, a blue jumper and shirt, picked up the decorations for the little tree located on the left-hand side of the card and for the roof.

The representative added: “The small Christmas tree, including the homemade ornaments and other decorations, were selected by Archie, and the tree will be replanted after the holidays.”

The holiday card was shared on Twitter by animal charity Mayhew, of which Meghan became patron in January 2019.

With the card, the Duchess published a personal message on Mayhew’s website, in which she revealed she made a personal donation to her patronage.

Meghan added her family have also donated money to other charities “with you in mind”.

She wrote: “This year we, as a family, have made donations to several charities with you in mind.

“From a local California organisation that helps families transition out of homelessness, to two of our UK patronages: one that supports animal and community welfare, and the other, a memorial fund for a cherished friend that helps to educate children and fight poverty in Uganda, we have honoured their work on behalf of all of us.”

The latter organisation mentioned by Meghan is the Henry Van Straubenzee Memorial Fund, of which the Duke and Duchess became joint patron in 2019.

Henry, a war hero who died in 2002, was the grandfather of Thomas and Charlie van Straunbenzee, long-time friends of Prince William and Prince Harry who attended with the royals Ludgrove School.

Charlie was among the guests at Meghan and Harry’s wedding in 2018 and is one of the godparents of Archie.

The local organisation mentioned by Meghan in her message is Transition House, a not-for-profit based in Santa Barbara which helps families facing or experiencing homelessness.

This year, Meghan, Harry and Archie are spending their first Christmas as a family in California.

In 2019, the Duke and Duchess did not celebrate the holidays at Sandringham House with other members of the Royal Family but took a six-week break from royal duties.

The family travelled to British Columbia, in Canada, where they spent a quiet Christmas.

From there, Meghan, Archie and Harry sent their first Christmas card.

Their e-card was shared on Twitter by the Queen’s Commonwealth Trust and showed little Archie crawling in front of the camera while his parents sat smiling under a Christmas tree.