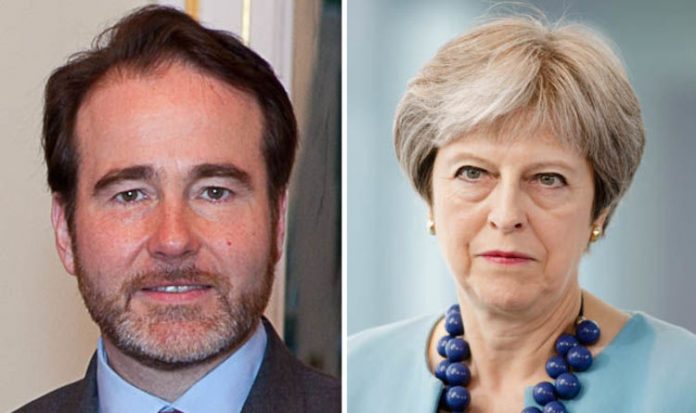 Deputy Chief Whip Chris Pincher sent a message to all Tory MPs calling for them to tweet their support for Mrs May.

He said: “My apologies for this round robin text but I’d be grateful if you could tweet our a variation of the following message.

“I appreciate you may wish to put your own stamp on it but would appreciate it if you could maintain the core theme.

“Please do so ASAP as there is media interest in what MPs are saying. Thanks C.

“Time to put the country first – PM delivering on the will of the people and we need a united Party to deliver her Brexit vision.”

Mrs May is expected to outline her third customs arrangement, after deadlock persisted within the Cabinet surrounding the ‘customs partnership’ and ‘maximum facilitation’ options.

The model will seek to keep the UK closely aligned to EU regulatory standards in order to ensure continued access to the EU’s single market and customs territory for industrial goods.

The plan includes a new “facilitated customs arrangement”, which is neither the ‘customs partnership’ model or the ‘maximum facilitation’ option.

The model intends to impose no tariffs on imports from outside the EU, provided that businesses can clarify the retail destination of the products.

New digital customs technology will also be implemented to determine the destination of goods to ensure that tariffs are not charged.

Critics have nevertheless raised concerns the model could hamper the UK’s ability to strike a free-trade deal with the US due to the need to maintain regulatory standards.

However a spokesman for the Prime Minister insisted such a plan would not jeopardise a US-UK trade deal.

He said: “It is categorically untrue to suggest that we will not be able to strike a trade deal with the US.

“The Prime Minister has always been clear that we will seek a comprehensive and ambitious trade deal with the US that reflects the strengths of our trading and investment relationship.

“The President himself has always made it clear that he is keen to sit down and talk with the UK about that.”