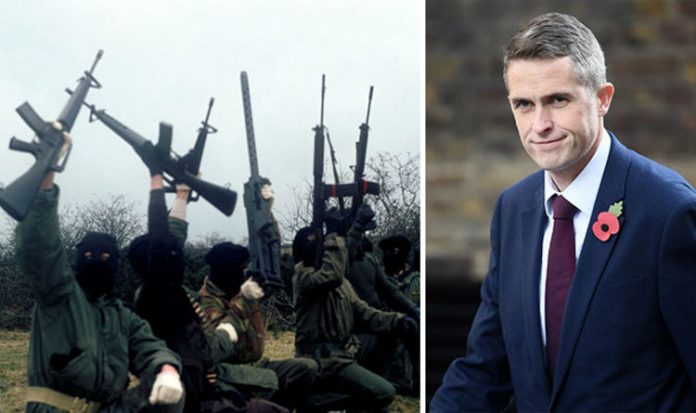 Mr Williamson argued the terms of the Good Friday agreement and the “disproportionate focus” on historic UK wrongs “amount to a de facto amnesty for terrorists already”.

He wants Theresa May to give UK troops who served in Northern Ireland a pardon to stop hounding them.

But he wrote “so be it” if IRA terrorists were included in a letter to the Prime Minister which has been seen by The Sun.

It reads: “If this means a wider amnesty, so be it: in the public mind the effect of the Good Friday Agreement sentencing reforms, the ‘On the Run’ letters which inadvertently led to the failure of the prosecution of John Downey for the 1982 Hyde Park bombings, and the apparent disproportionate focus of the current investigation on security forces amount to a de facto amnesty for terrorists already.

“It is time to give our veterans the protection they deserve.”

All 302 killings by troops during 30 years of the conflict in Ulster are being reviewed.

Some date back 40 years and critics say they are traumatising veterans now in their 70s and 80s.

This is despite the fact Tony Blair’s Good Friday Agreement released scores of criminal, killer terrorists from prison.

The move will anger the DUP who prop up Mrs May’s Government.

They said they will block any move that “could be used by the IRA and other terrorists to try and push for an amnesty for their crimes, and that would be totally unacceptable”.

Both Theresa May and Northern Ireland Secretary Karen Bradley have also branded a potential IRA amnesty as “unacceptable”.

Senior backbencher and former soldier Tom Tugendhat told The Sun: “The Government has rightly been clear – our soldiers served as part of legal, disciplined units, not terrorist gangs.

“To equate them would be wrong and deny justice to the many murdered by the IRA over decades of violence.”

But Gavin Williamson responded on Twitter, saying: “Bit amazed to see the way this is described. The reality is that I’m prepared to go to any lengths to stop this ridiculous vendetta against former service personnel.

“Hopefully that is exactly what other colleagues are also pushing for.”

The Government is consulting on measures on Ulster’s violent past, including a controversial Historical Investigations Unit to search for opportunities for prosecution.