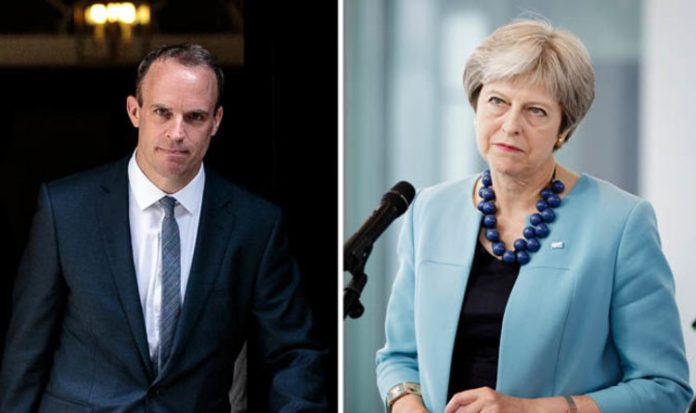 The prominent Leave campaigner was brought in to replace his former political mentor David Davis, promoted from his previous role as housing minister.

But hopes that a fresh face will help rest control of Brexit talks and policy from Mrs May’s senior Whitehall mandarin Olly Robbins were dashed quickly.

Asked whether Mr Raab would be in charge of negotiations, Mrs May’s official spokesman told a regular Westminster media briefing: “The Prime Minister has always been, from the outset, the lead negotiator in the Brexit talks.

“But in terms of Dexeu, there is a huge body of work to be done, in terms of preparations for the United Kingdom leaving the European Union and that obviously includes no-deal preparations as well.”

The comment seemed to be confirmation that Mr Raab is there to take a secondary supportive role with the Brexit department not pushing policy.

Asked whether Mr Raab was signed up in full to the plan agreed at Chequers, Mrs May’s official spokesman told reporters: “The Government’s position was agreed on Friday. The Prime Minister looks forward to working with Dominic Raab to deliver Brexit.

“He has been an excellent minister in the departments he has served in. She looks forward to working with him on delivering on the wishes of the British people.”

Mr Raab has in the past provoked Mrs May’s wrath and he was left on the backbenches when she became Prime Minister in 2016.

But asked why Mrs May did not reappoint Mr Raab to a government post when she first took office, waiting until after the 2017 election to give him a ministerial job, the Prime Minister’s spokesman said: “The Prime Minister appointed Dominic Raab to a hugely important ministry in terms of housing.

“It was a personal priority of the Prime Minister and shows the high regard in which she holds him.”

The appointment of the former lawyer almost immediately divided opinion with business leaders welcoming the choice of a man known for his grasp of policy details.

“There’s a tough job ahead and business is ready and willing to support him and his team at Dexeu to deliver a good Brexit at such a critical time for the country,” Ms Fairbairn said.

“Proposals unveiled last week gave a genuine confidence boost to businesses struggling with uncertainty, yet the devil will be in the detail. The White Paper therefore needs to deliver confidence for the UK’s world-leading services sector, as well as goods.

“Meanwhile, Europe’s leaders must approach the UK’s proposals with an open mind and flexibility, putting jobs and economic growth at the heart of a future deal that delivers for both sides.”

But leftwingers attacked Mr Raab’s promotion because of his support for making the British economy more competitive and reducing the burden on taxpayers.

He also supported attempts to scrap the controversial Human Rights Act and replace it with a British Bill of Rights.

The general secretary of the GMB union, Tim Roache, said that Mr Raab’s appointment “signals a promotion of a hard-right figurehead who has shown contempt for working people in Britain”.

Mr Roache said: “Theresa May has appointed someone who thinks British workers are lazy and have too many rights and he has already published plans to slash vital rights from the minimum wage to rights for agency workers.