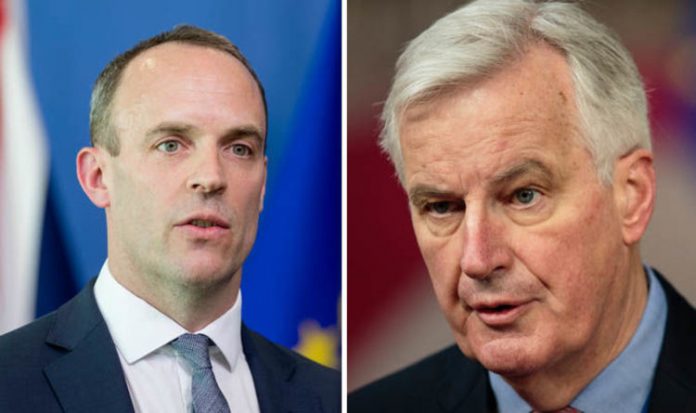 Dominic Raab stated the payment of the EU divorce bill is dependent on the agreement of a trade deal (Image: GETTY)

The new Brexit Secretary, who made his first speech in Brussels this week, declared the UK’s payment of the huge exit fee is dependent on the EU fulfilling its obligations to the negotiations.

Speaking to The Sunday Telegraph, Mr Raab said: “Article 50 requires, as we negotiate the withdrawal agreement, that there’s a future framework for our new relationship going forward, so the two are linked.

“So I think we do need to make sure that there’s some conditionality between the two.”

The new Brexit secretary indicated the UK’s payment of the divorce bill must be “linked” to the EU’s agreement to a final trade deal and withdrawal agreement.


Article 50 requires, as we negotiate the withdrawal agreement, that there’s a future framework for our new relationship going forward, so the two are linked

Questioned whether he would enshrine this condition in law, Mr Raab said: “Certainly it needs to go into the arrangements we have at international level with our EU partners.”

He said: “The payment of money has to be condition on a free-trade deal.

“The agreement must say that I don’t see how the Government would get a bill through Parliament that said we will pay the EU £39 billion and we can’t get anything definite in return.”

Michel Barnier said the UK must agree to a ‘backstop’ option in order to finalise a deal (Image: GETTY)

“There’s not an awful lot of justification for the EU running the risk of weakening the single market. That is our main asset.

“There’s no justification for us to create additional burdens on business just because the UK wants to leave.”

The EU official instead declared that a deal would be reached if the UK agreed to a new “backstop” option to avoid a hard border on the island of Ireland.

“But we need an operational backstop now, in the Withdrawal Agreement and not later.”

However Mrs May rejected Mr Barnier’s proposal of the EU’s “backstop” option, arguing it would risk creating an invisible border between mainland UK and Northern Ireland.

She declared that it is something “I will never accept and I believe no British prime minister could ever accept”.

Mr Raab is seeking to appease Brexiteer ministers who have expressed their anger at Mrs May’s ‘soft’ Brexit proposal finalised at the crunch Chequers summit just over two weeks ago.

Mr Raab admitted that he was still seeking to gain the support from all his Cabinet colleagues for the Prime Minister’s Brexit proposal.

Speaking to The Sunday Telegraph, he said: “I want to make sure we can persuade everyone – grassroots, voters, parliamentary party and ministers, including in the Cabinet – that we’ve got the best deal and the best plan to get the best deal.”

Pro-Brexit ministers including International Development Secretary Penny Mordaunt and Work and Pensions Secretary Esther McVey have not yet expressed their support for the proposal publicly.