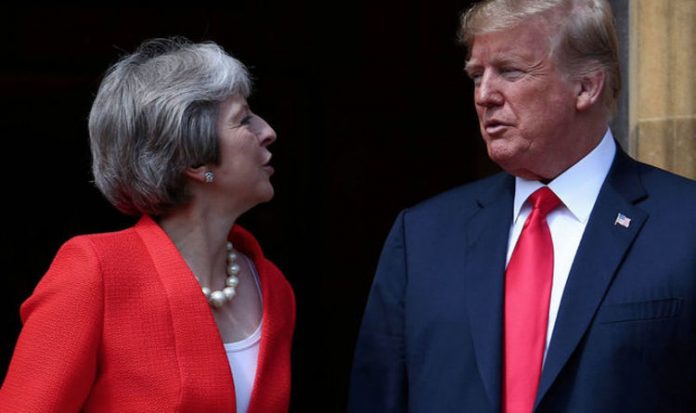 In a joint press conference with the 45th US President held on the second day of his four-day trip to the UK, Mrs May said the pair had agreed to pursue an “ambitious” trade deal together hours after Mr Trump warned her soft Brexit plot would “kill” a transatlantic partnership.

She said: “We agreed today that as the UK leaves the European Union we will pursue an ambitious UK US trade agreement.

“The Chequers agreement reached last week provides the platform for Donald and me to get an ambitious deal that works for both countries right across our economies, a deal which builds on the UK’s independent trade policies reducing tariffs, delivering a gold standard in financial services cooperation and – as two of the worlds most advanced economies – seizing the opportunity of new technology.”

Mr Trump dismissed “fake news” claims he blasted the Prime Minister yesterday over her White Paper and lavished praise on the leader, adding he said sorry to the “incredible lady” for causing her trouble after an interview with The Sun.

He said: “I said very good things abut her, they didn’t put it in the headline.

“When I saw her this morning I said I want to apologise because I said such good things about you – she said don’t worry it’s only the press.”

Mr Trump said a UK-US trade deal is back on the table and gave Mrs May’s negotiating skills the nod.

But he also backtracked and said he remains unconvinced the UK will leave the EU, while adding he still thinks Brexiteer Boris Johnson would make a “”great PM”.

He said: “Once the Brexit process is concluded and perhaps the UK has left the EU – I don’t know what they are going to do but whatever you do is OK with me. That’s your decision.

“Just make sure we are able to trade together.

“The US looks forward to finalising a great bilateral trade agreement with the UK. This is a great opportunity for our two countries and we will seize it fully.”