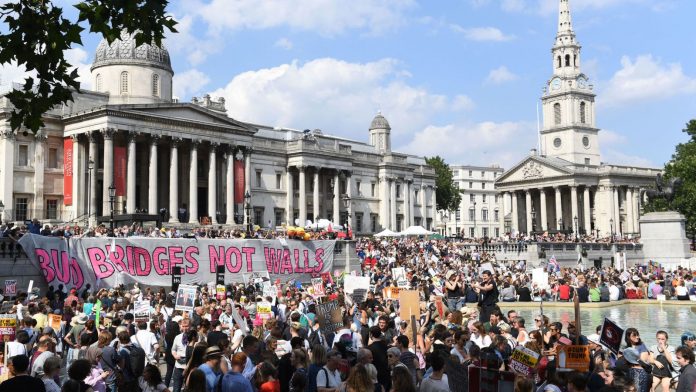 We all know that Donald Trump loves to boast about the size of his crowds – today he can truly say they came out in their many thousands in his name.

Of course, from what we know of the Donald, any suggestion the masses turned out in opposition to his visit will fall into the category of “fake news”.

Organisers claimed 250,000 people turned out for the huge demonstration in London.

While police have not given an official estimate, to my eyes this was one of the biggest rallies in recent years.

It was mass mobilisation by many disparate groups, all united in their belief that President Donald Trump should not have been afforded an official welcome to the UK.

The demonstrators, young and old, families and many individuals, came from far and wide.

A protester named Mal said fury at the US president’s LGBTQ policies meant they “had to be here”.

Another demonstrator called Misa held a sign supporting Stormy Daniels – the adult film star who claims she had an affair with the president – in the wake of her “politically motivated” arrest.

It perhaps shouldn’t be surprising in this most cosmopolitan of cities that so many of the marchers were not from the UK.

I lost count of the number of Americans on the march, more than happy that their head of state was being condemned and ridiculed on such a mass scale.

But it shouldn’t be forgotten that they represent one side of the debate in the US and abroad.

For every anti-Trump protester, there are those who support and admire this most bombastic of presidents – a self-declared “disrupter” of main stream politics.

A pub in Hammersmith was renamed The Trump Arms for the president’s visit after landlord Damien Smith said he wanted to counter “disrespectful” protests.

He branded the decision to allow a “Trump baby” blimp to be flown near parliament as “disgraceful”.

“To insult our great friends, and great allies, like that is not on,” Mr Smith said. “It’s childish behaviour.”

Despite a handful of Trump supporters gathering at the pub, we didn’t find too many along the route of the London match.

A few entered into a healthy exchange of views, but for the most part, this was an anti-Trump day.

Saturday is likely to be somewhat different when an official pro-Trump march in London will coincide with another anti-Trump demo.

While Friday was largely good-humoured and well-attended, the day after – against a backdrop of 30C (86F) temperatures – might just be a bit more heated.