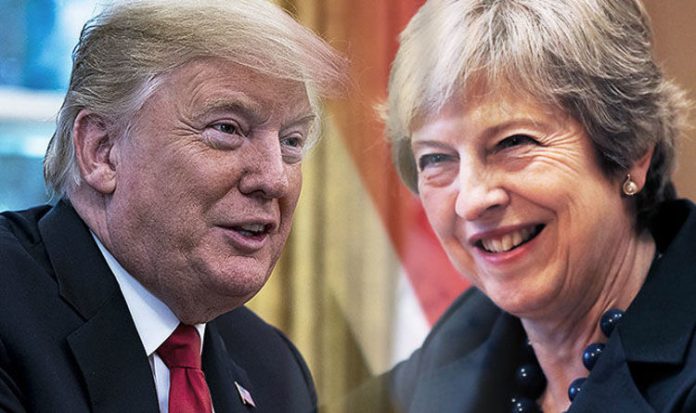 Downing Street confirmed that the Prime Minister will meet the US President on her trip to New York this week after she takes part in the UN General Assembly.

In a packed 48-hour schedule the Prime Minister will also take part in UN discussions on controlling chemical weapons where she will again condemn the Russian links to the Salisbury nerve agent attack on former Russian spy Sergei Skripal and his daughter Yulia.

Mrs May is also due to hold a meeting with Iranian President Hassan Rouhani where she will again raise the case of British citizen Nazanin Zaghari-Ratcliffe who has been falsely imprisoned in Iran.

After EU leaders seemed to go out of their way to humiliate her last week at Salzburg last week, Mrs May will be able to spend time with Britain’s key ally who wants to deal with the UK.

Ahead of the trip, the Prime Minister was grilled by CBS breakfast TV show ‘This Morning’.

Host John Dickerson began the interview by asking Mrs May: “Does Mr Trump listen to you?”

Mrs May said: “Yes we have very good discussions. The point of special relationship is that we can have those frank and open discussions.

“When we disagree we can say to each other we disagree and why we disagree but at the same time we cooperate on so much else which is of crucial importance to us. Security and defence being key to that.”

She also pointed out that she had persuaded Mr Trump on the importance of Nato.

She said: “I was the first leader to come after his inauguration. We were able to talk openly about the value of NATO and he confirmed the American commitment to NATO.”

The Prime Minister also insisted that she trusts him.

She said: “We work together, we have a special relationship.”

Mr Dickerson asked if Mr Trump’s failure to raise the Salisbury poisonings with Russian President Vladimir Putin at their summit in Helsinki was a ‘missed opportunity’.

However, Mrs May said: “I think Vladimir Putin is in no doubt about the view about what happened on the streets of Salisbury”.

But Mr Dickerson said: “Could it have been Amplified by the American President saying, given the special relationship that was built around common defence in Churchill’s original speech, whether that could have sent the message home in a personal way?”