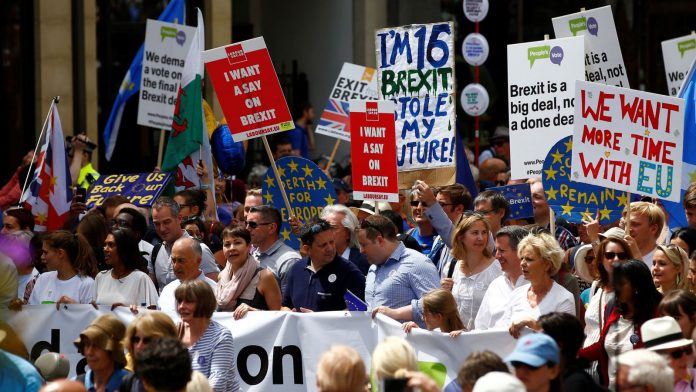 Labour will vote against Theresa May’s Brexit deal, the party has confirmed ahead of its conference debate on a “People’s Vote”.

The shadow Brexit secretary Sir Keir Starmer MP will tell delegates in Liverpool that Labour will vote down a “blind Brexit”.

“No ifs, no buts,” he will declare in his speech in the Brexit debate at Labour’s conference.

“The party that once promised to fix the roof while the sun was shining now seems intent on burning the whole house down.”

Sir Keir will claim the government’s Brexit deal has yet to meet the Labour Party’s six tests, despite the PM promising she was determined to meet them.

Ahead of the debate in Liverpool, Sir Keir published a Labour dossier which he claims shows how the Tories’ Brexit proposals are failing to meet the tests.

The Chequers deal is the Cabinet agreement to ask the EU to maintain, post-Brexit, common rules and existing borderless free trade in goods and agriculture, but not services.

Day three of Labour’s conference will be dominated by the Brexit debate, on a motion drawn up by party fixers from 151 submitted by local parties and trade unions.

The motion being debated states: “If we cannot get a general election Labour must support all options remaining on the table, including campaigning for a public vote on the terms of Brexit.”

That falls short of demands by pro-Remain Labour MPs who wanted a much stronger commitment to campaign for a People’s Vote, but with the party badly split it gives Jeremy Corbyn room for manoeuvre.

In his speech, Sir Keir is expected to say: “Just when we need a strong government, what do we see from the Tories? Division, chaos and failure.

“No credible plan for Brexit. No solution to prevent a hard border in Ireland. And no majority in Parliament for the Chequers proposals.

“A Tory civil war that has gone on for years, now threatens our future prosperity.

“So, I’ve got a message for the prime minister. ‘If your party wants to tear itself apart, that’s fine, but you’re not taking our country with you.'”

“And if the prime minister thinks we’ll wave through a vague deal asking us to jump blindfolded into the unknown she can think again. You can’t meet Labour’s tests by failing to provide answers. We will vote down a blind Brexit.

At a Parliamentary Labour Party fringe meeting, the split in the party over calls for a second Brexit referendum was laid bare in divisions among MPs.

“Not because I think we should take whatever is offered to us by the prime minister, but because I don’t believe that spending more time arguing over a process will actually change the minds of the people who we need to come on board to vote to stay in the EU.”

Pro-Remain MP Stephen Kinnock said: “One thing we know a referendum will not do, it will not reunite our country. It will entrench, it will polarise, it will consolidate those divisions and those differences.”

He added: “We do have to take a long, hard look in the mirror before we commit to something that is going to sow the seeds of division. It will make the 2016 referendum look like a walk in the park.”

But Mr Kinnock said that if another referendum were to be held, it would be “absurd” for it not to contain the option of remaining in the EU.

At the same fringe meeting, the MPs were asked to define Brexit for a nine-year-old girl who was in the audience.

Mr Kinnock said: “Are you a Harry Potter fan? You know in Harry Potter, they have got magic and they can wave a magic wand and make things happen? Well, it’s not that.”

Mr Snell said: “Imagine you are in the playground with your friends, having a game of football.

“It’s when one of your friends wants to go and play football by themselves – but they may need to borrow a ball.”

Pro-Remain MP Ellie Reeves said: “I have got a three-and-a-half year old and when we were coming back from our summer holiday in Italy and we were going through passport at the airport in Italy before getting on the flight and we were going through the EU bit I tried to explain to my son that this was potentially the last time he would ever be travelling back from Europe as a citizen of the European Union and I was very sad telling him that.”

Richard Corbett, leader of the Labour MEPs, said: “I think we can be pretty certain that any Tory Brexit deal won’t meet our six tests – so we will be voting against in the House of Commons.”