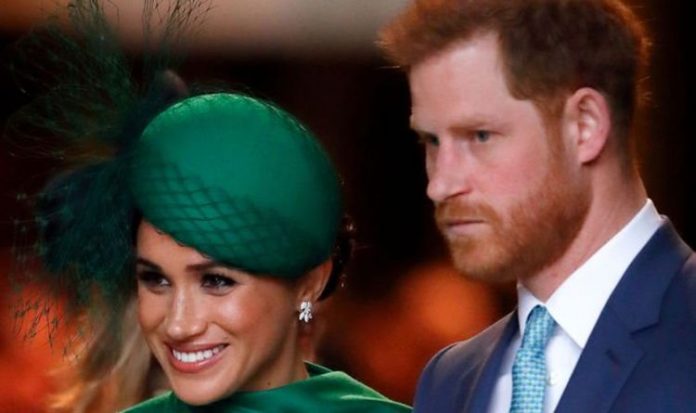 The Duke and Duchess have said the first Archewell Audio podcast will be released over the festive period. Earlier in the year, the couple also signed a deal with streaming giant Netflix to produce a range of programmes.

In a trailer on Spotify’s website, Prince Harry says the project is focused on bringing forward “different perspectives and voices that perhaps you haven’t heard before”.

But Mr Morgan has blasted the couple, who are now living in California.

Writing for the MailOnline, the Good Morning Britain host said: “The one thing the world definitely needs right now is those two absurd ultra-woke freeloading chancers giving us yet more of their views on life from the sanctity of their $11 million Californian mansion.

“As with everything the Duke and Duchess of Sussex seem to do these days, their new commercial venture appears to be driven by large dollops of narcissism, hypocrisy and greed.”

Mr Morgan pretended to be sick into a bin while presenting the ITV show after the podcast was announced on Tuesday.

He said: “How utterly vomit-making.”

Co-host Susanna Reid said she “thought it was a parody”.

Harry adds: “And that’s what this project is all about, to bring forward different perspectives and voices that perhaps you haven’t heard before and find our common ground.

Meghan then continues: “And, you know, this is also a moment to celebrate kindness and compassion, something we saw in so many places this year, and which will underlie everything you hear from Archewell Audio.”

Meghan adds “So that’s what we are up to, and first up,” allowing Harry to finish with, “is a holiday special.”

The audio is accompanied by a short description.

It says: “Prince Harry, the Duke of Sussex and Meghan, the Duchess of Sussex, present Archewell Audio.

Harry and Meghan’s reps have been contacted for a comment.