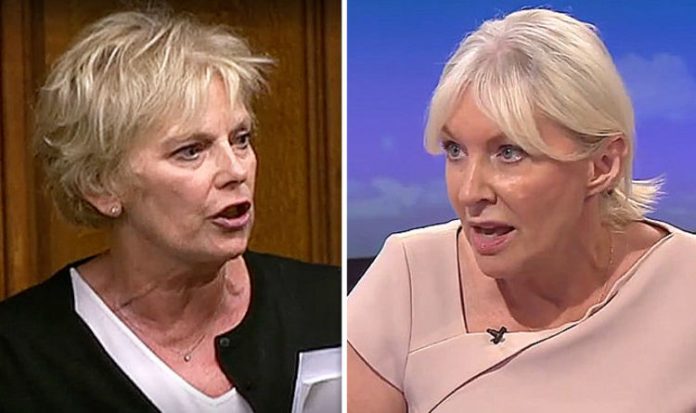 On Monday, Anna Soubry attacked the wealthy in her own party as she demanded frictionless trade must continue with the EU post-Brexit.

The Conservative MP sparked a fierce debate in the House of Commons. Nadine Dorries has branded her remarks as “irrational” during an interview.

She said: “The comments I have heard from people watching that were that it’s no long anger, they have just lost the plot.

“It’s not anger, it is something visceral and different. It’s irrational.

“Pointing the finger at people with inherited wealth and gold-plated pensions.

“Anna Soubry is a wealthy woman, who was she talking about? Most of the people who voted leave are not wealthy people.

“She was pointing fingers at lots of people, it was an irrational speech. It was one of the worst moments that we have ever seen or witnessed in the chamber.

“I have been there for 13 years and I haven’t seen as many people groan or, one person came out in the tea-room, who is a Remainer, and said ‘I feel sick sat in there watching that, it lets us down, it lets us on the Remain side down.”

Ms Soubry accused the Government of being led by Brexiteer Jacob Rees-Mogg after four amendments were accepted to Theresa May’s Customs Bill.

Leading Tory Remainer Anna Soubry complained the Prime Minister had lost her power and told the Commons: “The only reason that the Government has accepted these amendments is because it is frightened of somewhere in the region of 40 members of parliament – the hard, no-deal Brexiteers, who should have been seen off a long time ago and should be seen off.”

She continued: “Who is in charge? Is it the Prime Minister or is it the member for North East Somerset Jacob Rees-Mogg?”

Ms Soubry added: “If we do not deliver frictionless trade either by a customs union or by a magical third way that the Prime Minister thinks she can deliver, and good luck to her on that.

“If we do not do that, thousands of jobs will go. Honourable members sitting on these benches, in private conversations know that to be the case.

“What they have said in those private conversations is the those of hundreds and thousands of jobs will be worth it to regain our countries sovereignty.

Prime Minister Mrs May insisted the amendments on Monday that the Government accepted do not change the blueprint agreed at Chequers.

She told MPs: “He is absolutely wrong in his reference to the agreement that was reached at Chequers, I would not have gone through all the work that I did to ensure that we reached that agreement only to see it changed in some way through these Bills.