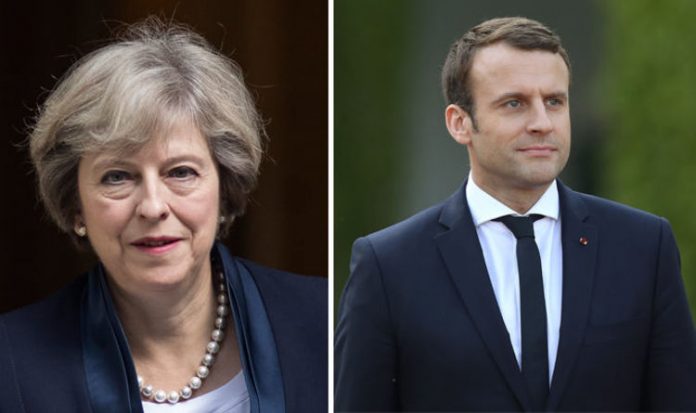 Theresa May is heading to meet with the French President at his holiday retreat this week, cutting her own break in Italy short by two days.

However, a number of Government sources have said the meetings could spell trouble for the Prime Minister and her Brexit plans.

One unnamed source told The Sun: “Our conversations with the French over the last week have revealed that they are watching what’s going on in Westminster very closely.

“They don’t see there is any reason to give any ground at the moment when the hardcore Brexiteers or extreme Remainers could rip it all up in the Commons in the autumn.

“That’s why it’s so important for everyone to back Theresa now rather than their own vanity causes.”

The Tory party has been harshly divided over the Brexit blueprint in recent weeks, with Remainers and Brexiteers both unhappy with the proposals.

A former UK ambassador to France has also warned the informal meeting could spell trouble.

Lord Ricketts said May still has some “hard negotiating” to do.

He said: “We’re not going to find the French are going to break ranks.

“We’re going to have to do the hard negotiating in Brussels.

“The problem with no deal is they read our own media, and they see it can’t be done.”

Officials are keen to reinforce that these meetings – held while both leaders are on their summer breaks – are not official talks.

An Elysee Palace official confirmed the meeting is “not a negotiation”.

They added they are “not a substitution for the negotiations led by Michel Barnier”.

France has trust in the EU top dog and “that is how it will remain,” added the French source.