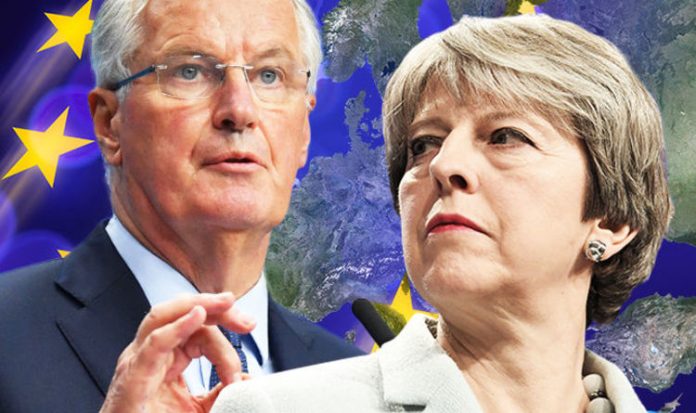 After months of prevarication and refusal to compromise, Mr Barnier has reportedly come under pressure from member state governments who have realised Britain is prepared to walk away with no deal on World Trade Organisation terms.

The EU chief’s negotiator’s issued noticeably warmer words on Thursday, in an opinion piece and on Twitter ahead of Theresa May’s crucial meeting with French President Emmanuel Macron on Friday.

“EU wants new partnership w/ UK on security & w/ ambitious free trade agreement at its heart. We can do this based on #EuCo principles: indivisibility of 4 freedoms & EU autonomy.“

He said: “The UK wants to keep free movement of goods between us, but not of people and services.

“And it proposes to apply EU customs rules without being part of the EU’s legal order.

“Thus, the UK wants to take back sovereignty and control of its own laws, which we respect, but it cannot ask the EU to lose control of its borders and laws.”

The words came amid reports in Brussels that EU officials are concerned Britain has grabbed the initiative.

An EU Diplomat told the Daily Express: “Michel Barnier is still the EU27’s chief negotiator but his negotiating guidelines set by heads of state can change under pressure from Prime Minister May.”

The diplomat conceded that there is a realisation that if they are going to avoid a no deal scenario “something has to be done”.

After drawing the ire of Brexiteers and losing her Brexit secretary David Davis and foreign secretary Boris Johnson over the Chequers compromise – which ties Britain to EU regulations on goods – Mrs May has little or no room for manoeuvre.

Sources in Brussels have said that France is the hardest negotiator in the lower level working group negotiations but are “isolated” in their pressure on Britain.

An EU diplomat said: “Do you know the country blocking the most compromises? France, they are the toughest on the UK.

“They block most of the offers brought to the table by the UK, they allow no compromises.”

However, Germany, the other big player, are understood to be more open to change with reports that Angela Merkel has already agreed the Chequers compromise.

Brexit secretary Dominic Raab on Thursday led the diplomatic push to bring France on board with a compromise meeting the French Europe minister Nathalie Loiseau.

He tweeted a picture from the meeting and said: “I had a warm and constructive first meeting with French Europe minister Nathalie Loiseau.

“We discussed the progress of negotiations with Michel Barnier, the proposals in our White Paper and our shared commitment to work closely together.”

The sudden softening of the EU position follows warnings by new foreign secretary Jeremy Hunt that the EU is facing a disaster if it forces an “accidental no deal”.

Evidence has emerged that the World Trade Deal option – where the UK keeps its divorce bill of £39 billion and goes on to World Trade Organisation Rules – will help the UK to thrive.

Economists have pointed out that countries using WTO rules have three times more success than on trade with EU than member states while it could boost income to the Treasury by £80 billion a year.

However, countries like Germany and Ireland which have strong export interests in the UK are set to suffer if there is no trade deal with Britain.

But with the EU ready to compromise Mrs May is facing more criticism at home for her Chequers deal which has been described as turning Britain into a “vassal state” to the EU.

According to a poll on Conservative Home the Prime Minister has a record low rating of -48.1 percent among party members.

The winners in the cabinet were Home Secretary Sajid Javid on +67.2 percent and International Development Secretary Penny Mordaunt with +50.8 percent.

Chancellor Philip Hammond – dubbed by Boris Johnson as the “heart of Remain” in the Cabinet – also failed to impress party members with a rating of -42 percent.

A leadership survey carried out by the website saw Mr Johnson come out on top with 30 percent.