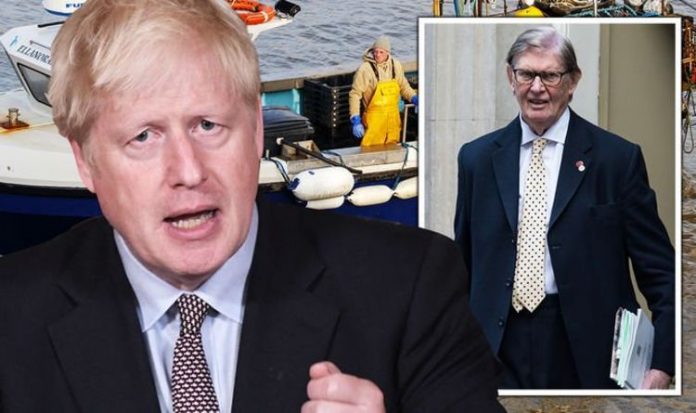 The European Research Group’s “star chamber” has been advised by lawyers that Prime Minister Boris Johnson’s deal does indeed restore the UK’s sovereignty. In a significant show of support for the Prime Minister, Sir Bill Cash ‒ who convened the group of eurosceptic Tory MPs ‒ will now advise members to back the Government. A key sticking point prior to this development appeared to be on fishing rights, as outspoken Brexiteers such as Nigel Farage have been critical of Mr Johnson for giving away too much in this area. But the ERG confirmed in meeting minutes that members are “confident” the Government will restore the “question of practical sovereignty” when it comes to fishing.

This is because Mr Johnson’s deal does pull the UK out of the much-despised Common Fisheries Policy.

The group also note how the UK can modify rules if it wants to, as long the modifications do not discriminate between British and EU vessels.

Finally, the ERG conclude that by 2026 “the UK will have the legal right to take full control of its waters”.

There is a veiled threat if this is not secured, as the eurosceptic MPs clarify that this is “dependent on the preparedness and robustness of the UK Government” when the time comes.

In notes released by Tory MP Andrea Jenkyns, the group’s summary concludes: “The agreement provides for continued access by EU vessels to UK waters (i.e. the UK’s territorial waters and its Exclusive Economic Zone) during a five-and-a-half year period up to mid-2026, during which EU vessels are to have defined, but progressively declining, shares of the total allowable catches of fish species as specified in the annexes.

“However, the agreement does not require the UK to continue to follow and apply the Common Fisheries Policy rules.

“Furthermore, and importantly, the UK may modify the rules, e.g. to strengthen conservation, subject to the constraint that it may not discriminate between UK and EU vessels in the rules which it applies.

“At the end of the transition, the UK will have the legal right to take full control of its waters, despite a question mark introduced by the last column in the table in Annex FISH.1 (p.893) being headed ‘2026 onwards’.

“After that time the EU may impose tariffs on UK fish exports to the EU, and EU leverage may also include the termination of the energy title and the transitional, less restrictive rules of origin for electric batteries.

“The question of practical sovereignty is therefore dependent on the preparedness and robustness of the UK Government’s response at that time, which we are confident they will achieve.”

The ERG’s summary will come as a huge boost to Downing Street as it looks to drum up support for Mr Johnson’s deal, not least because the group proved to be such a thorn in the side of his predecessor, Theresa May.

Mark Francois is the current Chair of the ERG (Image: GETTY)

It stands in contrast to the thoughts of Brexit Party leader Nigel Farage who, despite praising Mr Johnson for “ending the Brexit war”, argued the deal was “even worse than I had feared” for fishermen.

Writing in the Sunday Telegraph, he claimed the UK “still won’t own the fish that swim in its waters”, and said the Prime Minister had failed the industry.

He added: “The current terms of the Common Fisheries Policy will continue and just 25 percent of EU boats’ fishing rights in UK waters will be transferred to Britain’s fishing fleet up to 2026.

“Originally, it was expected that the EU’s rights would be cut by 80 percent.

“Nobody should underestimate the sense of betrayal in our coastal communities this has inspired.

“Even if after 2026 Britain wants to increase further its own quota allocation, it will have to pay compensation to the EU to do so. This is an outrageous humiliation.

“The EU should be paying Britain to fish up to six miles from our shores.”

While Mr Johnson’s deal will likely pass, the SNP has already declared it will vote against it and Labour faces a civil war over whether to back it.

Several high-profile MPs within the party have written to Sir Keir Starmer to demand he vote against the deal.

Sir Keir appears adamant he will support it, despite highlighting several perceived faults.

It comes as Cabinet Office Minister Michael Gove admitted businesses will face a slight period of uncertainty from the beginning of next year.

“I’m sure there will be bumpy moments but we are there in order to try to do everything we can to smooth the path.”