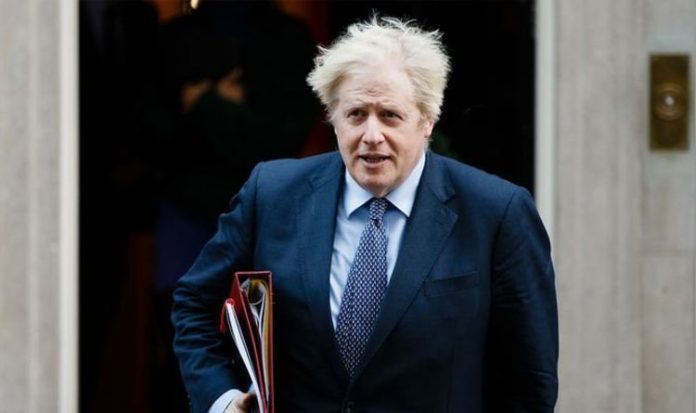 Prime Minister Boris Johnson has secured a free trade agreement with the EU, and the deal is likely to be voted through in the House of Commons today. Sir Keir Starmer has been critical of the agreement, but says Labour will support it to avoid a no deal Brexit. Nicola Sturgeon and the SNP will oppose it, but Mr Johnson has secured the support of a key group in Parliament – the European Research Group (ERG). The group of eurosceptic MPs within the Conservative Party convened a so-called “star chamber” of legal advisers to scrutinise the Prime Minister’s deal.

They concluded that it does protect UK sovereignty on issues such as fishing and regulatory divergence and will therefore support the agreement.

However, notes from the ERG’s meeting expose a veiled threat directed towards Downing Street, meaning Mr Johnson could face renewed backlash from his own party if he fails to deliver on his Brexit promises.

The ERG alluded to how the UK can modify rules later down the line if it wants to, as long as the modifications do not discriminate between British and EU vessels.

They also concluded that by 2026 “the UK will have the legal right to take full control of its waters”, but acknowledge that this is “dependent on the preparedness and robustness of the UK Government”.

This is a clear warning from the ERG to Mr Johnson or any potential successor, as they seek to make sure the UK seizes more control over fishing grounds once the opportunity arises.

If Mr Johnson fails to do so, the political consequences could be career-ending.

It could even spark a Conservative Party crisis, as Mr Johnson will have to prove his worth to the ERG before the next general election ‒ that has to take place by 2024 ‒ where the Tories will want to build on their 80-seat majority.

It is also a brave move, given there could be a change of Government by 2026, meaning the ERG could be reliant on Labour to achieve their goal.

Fishing was a key issue in talks, and was one of the major reasons the UK and EU took so long to reach a deal.

Both sides have now agreed that 25 percent of EU boats’ fishing rights in UK waters will be transferred to the British fishing fleet, over a period of five-and-a-half years.

A number of fishing organisations in the UK were furious with this compromise, and Brexit Party leader Nigel Farage said the deal was “even worse than I had feared” for fishermen.

He wrote in day Telegraph: “The current terms of the Common Fisheries Policy will continue and just 25 percent of EU boats’ fishing rights in UK waters will be transferred to Britain’s fishing fleet up to 2026.

“Originally, it was expected that the EU’s rights would be cut by 80 percent.

“Nobody should underestimate the sense of betrayal in our coastal communities this has inspired.

DON’T MISS
EU warned ‘we will wake up and Europe will be gone’ [INSIGHT]
EU fury as Sweden warned: ‘If Brexit happens, we want to leave!’ [ANALYSIS]
Barnier boasted ‘UK are rule-takers’ before PM’s Brexit concessions [INSIGHT]

“Even if after 2026 Britain wants to increase further its own quota allocation, it will have to pay compensation to the EU to do so. This is an outrageous humiliation.

“The EU should be paying Britain to fish up to six miles from our shores.”

The ERG also highlighted in their meeting notes how fishing could lead to trading tension between Brussels and London.

They said: “At the end of the transition, the UK will have the legal right to take full control of its waters, despite a question mark introduced by the last column in the table in Annex FISH.1 (p.893) being headed ‘2026 onwards’.

“After that time the EU may impose tariffs on UK fish exports to the EU, and EU leverage may also include the termination of the energy title and the transitional, less restrictive rules of origin for electric batteries.”

This highlights a key advantage Brussels could gain years after Brexit talks were thought to have been concluded.