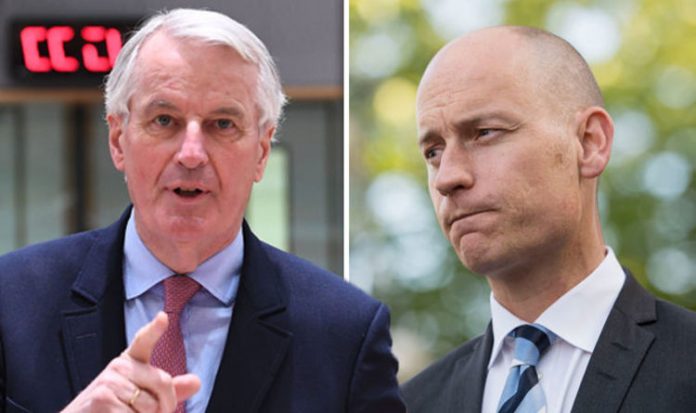 The Labour MP told Brexit minister Dominic Raab he had been told Mrs May’s proposals were “dead in the water” by EU negotiator Michel Barnier.

When pushed on more information, he said he had been told “les propositions song mortes”, which translates as “the proposals are dead”.

However the EU has quickly dismissed the accusation, saying a recorded transcript will prove Mr Barnier said nothing of the sort.

He said rather than dismiss Chequers as dead, Mr Barnier had actually raised several “positive elements”.

Regarding the “dead” jibe, he said Mr Barnier said nothing of the sort and the official minutes would show this.

“I don’t think that people present in the room and beyond the room have any doubt on what we said on Chequers.

“We identified where there were positive elements and we discussed also the possibility for further discussions to address issues that still create problems.”

He added that the private meeting provided “the perfect recipe for everybody coming out of there and saying what one or the other understood Michel saying”.

Mr Schinas said: ”Let’s wait for the transcript and then let’s check the sort of things that are reported of what Michel Barnier said against what he actually really said.”

But relations again soured yesterday when Mr Raab and Mr Barnier appeared to have a fiery confrontation during talks in Brussels.

Brussels sources said the pair clashed over the border issue at a highly-charged meeting in Brussels and that Mr Barnier was “absolutely furious”.

Progress on the Irish border issue since then has been “close to zero”, they said.

Mr Barnier has repeatedly rejected UK proposal for avoiding a hard border such as using technology and exemptions to create an invisible border or a “dual tariff” customs partnership.

Senior EU officials have dismissed both suggestions as “magical thinking” and “unicorns”.