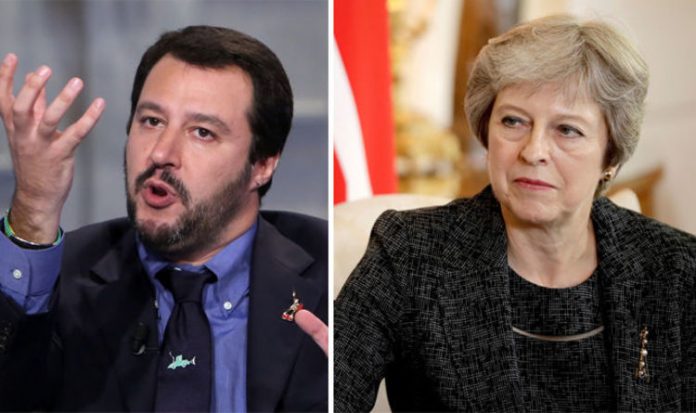 Matteo Salvini, Italy’s Deputy Prime Minister, told the Sunday Times the EU was trying to “swindle” the UK out of a good deal.

The far-right interior minister encouraged the Prime Minister to take a tougher stance in Brexit talks.

He said: “My experience in the European Parliament tells me you either impose yourself or they swindle you.”

Mr Salvini said the Prime Minister should be willing to walk away from the Brussels bloc without a deal.

He said: “Because on some principles there is no need to be flexible and you should not go backwards.”

Theresa May’s Chequers White Paper has been widely criticised by Brexiteers for its concessions to the EU.

Despite promising to end freedom of movement, the deal would keep the UK closely aligned to the EU for trading and tax purposes.

Mr Salvini accused Brussels of being self-serving and having “no objectivity” in the talks.

He said: “There is no objectivity or good faith from the European side.”

The Italian Deputy Prime Minister praised the UK’s decision to leave the EU, and the former Government’s choice to hold the referendum.

He said: “I hope negotiations end well for the UK to serve as an example of the people coming out on top of the EU.

“I remember the referendum stage as an example of participation and freedom.”

He told the paper Italy would be Britain’s friend in the negotiations and he “definitely” wants the UK to come away with a good deal.

He said: “I hope it can be an opportunity for the British.”