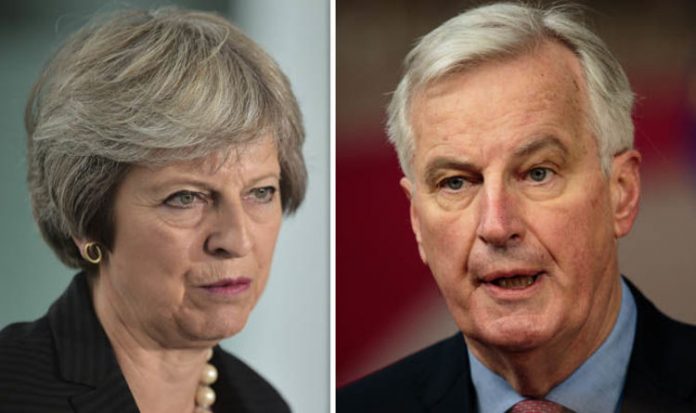 The EU lawmaker lambasted Theresa May’s Brexit White Paper, and raised concerns over the EU’s demands for further compromises on key issues relating to trade and the customs bill.

Speaking exclusively to Express.co.uk, UKIP MEP Margot Parker said: “We must not become a ‘vassal state’ of the EU.

“The British people voted to leave and now the EU waves a big stick at us, it appears we are leaving in name only.”

Ms Parker also argued that the amendments added to the customs bill by the European Research Group in a bid to quell Brexiteer fears, still failed to deliver on the will of the British electorate.

Commenting on the amendments, she said: “They are well wide of the mark.

“We need to leave under the terms we voted on; to take back control of our borders, waters, finances and laws.

“The people voted to leave; this is non-negotiable.”

Speaking alongside Brexit Secretary Dominic Raab in Brussels on Thursday, Mr Barnier said: “The EU cannot and the EU will not delegate the application of its customs policy and rule, VAT and excises duty collection to a non-member who would not be subject to the EU’s governance structures.”

He noted the EU had “no object in principle” to a backstop model being applied to the whole of the UK, but raised doubts over whether it could be implemented while protecting the integrity of the customs union.

He said: “We have doubts that it can be done without putting at risk the integrity of our customs union or commercial policy our regulatory policy.”

In a firm conclusion, she added: “Why should the UK be part of a system collecting tariffs on behalf of the EU?”

Mrs May nevertheless appears determined to win support for her White Paper after meeting with Austrian Chancellor Sebastian Kurz, who voiced support for a ‘soft’ version of Brexit.

Speaking at a brief joint press conference, Mr Kurz said: “The Brexit decision is a decision we see very negatively.

“But, of course, it has been taken by the British people so now we have to find a way to deal with it, and from our point of view it is important to avoid a hard Brexit.”