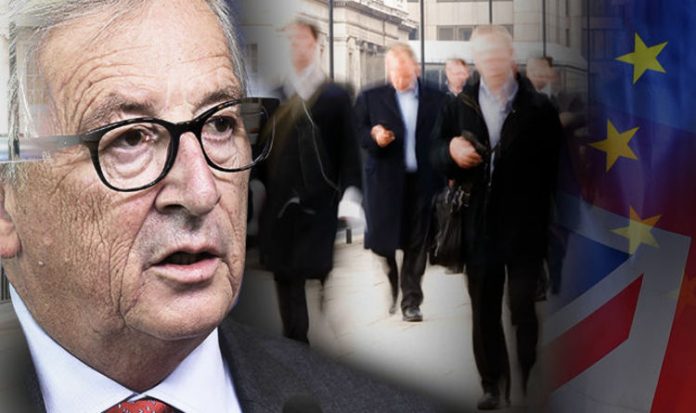 The EU’s next seven-year multiannual financial framework is “being held over Eastern European” members to ensure they tow the common line on Brexit.

Eastern countries receive a great deal of money through what is known as the EU’s cohesion fund, which helps bridge the gap between the richer and poorer EU member states.

However, in the latest proposals this fund has been interlinked with behaviour. If EU members are seen to be breaking the bloc’s rules, bosses will cut their cohesion funding.

While a cut-off of funds is most commonly associated with the rule of law, the source reveals it is also being used to keep Eastern European members in line on Brexit by making them “worse off”.

They said: “The EU is in the process now of discussing its next MFF – the seven-year programme from January 202.

“There is no doubt that is being held over Eastern European states who receive large amounts money – ‘Behave on Brexit or you’ll be worse from the MFF.’

“That is used as a method of control.”

Bulgaria is just one of the country’s gagged from making comments on Brexit through the MFF blackmail, they added.

Eastern European countries consider Britain as a vital security partner and believe it crucial that pact is maintained even after Brexit.

The Commission has maintained it cannot hold substantive talks on a security treaty until Britain has agreed on the EU’s backstop proposal to avoid a hard border in Ireland.

German interior minister Horst Seehofer broke ranks in a letter to Commissioners, where he insisted a failure to strike a security partnership with the UK puts lives at risk.

In a confidential letter, he wrote: “It is not my intention to comment on the strategy of negotiations. However, in my capacity as German interior minister, I may be so bold as to stress that the security of citizens must have the highest priority. This must not be put at risk.”

There has also been a degree of discontent behind the scenes with the European Commission’s hardline approach to a future deal of security – which involved the UK being pushed out of the satellite navigation programme Galileo.

A German-clique, led by the Commission’s controversial Secretary-General Martin Selmayr, upset member states by attempting to push Britain out of the project.

Baltic states – alongside Spain, Sweden and the Netherlands – have all objected to the Galileo shutout, but have offered little public criticism.