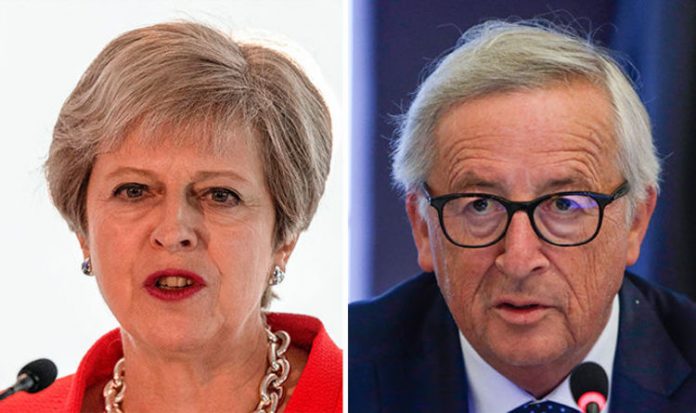 The EU is expected to make twin statements at a meeting in Salzburg later this month.

As well as giving some evidence of progress in negotiations, the EU is also expected to make a statement on Northern Ireland, which officials and diplomats have become increasingly frustrated over.

Mrs May’s Cabinet was told today that the Prime Minister’s Chequers plan received a “warm and positive” response from European capitals during a Brexit diplomatic offensive over the summer.

This move seems to support the theory that the Government plans to go over the heads of the European Commission and lobby European leader directly – a move which has not been rejected by Downing Street.

Mrs May’s official spokesman said: “The negotiations are taking place with the Commission, we have always respected that fact.

“But equally this is a decision that at the end of the process will be taken at a political level by the European Council, so you can obviously expect a continued and strong engagement with fellow European countries.”

But EU member states fear the UK is trying to push back the resolution on the Irish border into the transition period.

One EU diplomat said: “The first part will say that the Chequers proposals were welcomed and that we are talking about the future: an unprecedented deal which will be our best effort at an internal market in goods.

“That is all true and it is something for her May to have at conference, that she needs. The second statement will be a very stern warning. It is clear that the British game plan is to push this back, but they need to step on it now, and stop playing around.”

READ  Princess Michael of Kent title: Why do her children not have prince or princess titles? | Royal | News (Reports)

Senior EU diplomats and officials have said the central tenants of the Chequers proposal are unworkable.

The Tory MP travelled with the Common’s Brexit Committee to Brussels for a private meeting on Monday with Mr Barnier.

Speaking in Brussels following the meeting, Mr Rees-Mogg said: “Mr Barnier was, as you would expect, extraordinarily charming and well informed.

“He and I found that we were in a considerable degree of agreement that Chequers is absolute rubbish and that we should chuck it and what we should have is a Canada-style free trade deal.

“He seemed to think that was the way forward and has published charts showing that.

EU leaders will meet in the Austrian city of Salzburg on September 19 and 20.

Mrs May is likely to have the opportunity to present her thoughts to leaders over dinner on the first evening and then leaders discussing the issues over lunch the next day.