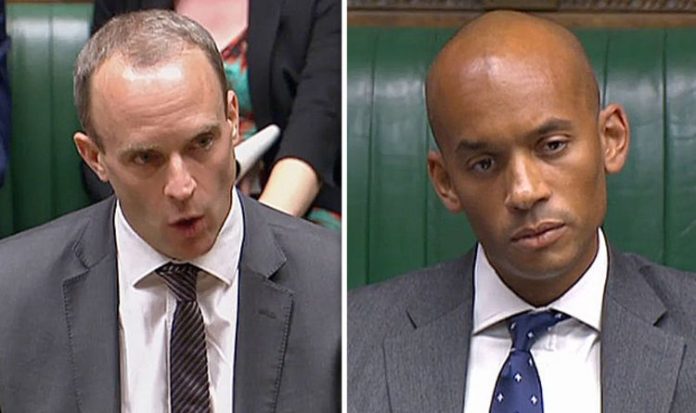 Remain supporter and Labour MP for Streatham, Mr Umunna, quizzed the Brexit Secretary about what will happen if the Brexit deal is voted down in Parliament and there is no People’s Vote.

The response from Dominic Raab left Mr Umunna shaking his head from side to side.

The Labour MP pressed Mr Raab to see whether the Government would ask for an “extension to the Article 50 process” in that case.

He said: “Let us be clear, there is no majority in this House to crash out of the European Union with no-deal. Given all the damage that will entail for communities in this country.

“But, if no consensus can be agreed in this House on how we leave the European Union, how else does the Secretary of State envisage resolving that issue if not by referring it back to the people.

“And if he disagrees with me on that, does he at least accept the Government may have to ask for an extension to the Article 50 process so that a deal can be reached?”

Mr Raab pointed out that referring back to the British people or asking for an extension to Article 50, would invite the “worst terms” from the EU in Brexit negotiations.

He replied: “I say to the honorable gentleman, who I hold in high regard, and have debated this issue since during the referendum.

“Even banding that around would almost invite the worst terms from our EU partners, which I know is not what he, or I, wish to see.”

Following the response from Dominic Raab, the Labour MP was seen shaking his head from side to side.

During his speech in the Commons on Tuesday afternoon, the Brexit Secretary updated MP’s on negotiations with the European Union claiming he was “confident that a deal is within our grasp”.

He said: “I am confident that a deal is within our grasp if our enthusiasm and pragmatism is matched by our EU friends.”

On Monday the Prime Minister was placed under increased pressure after former foreign secretary after Boris Johnson ripped into the Chequers plan in his column for The Daily Telegraph.

Mrs May’s spokesman responded by saying: “Boris Johnson resigned over Chequers. There’s no new ideas in this article to respond to.

“What we need at this time is serious leadership with a serious plan and that’s exactly what the country has with this Prime Minister and this Brexit plan.”