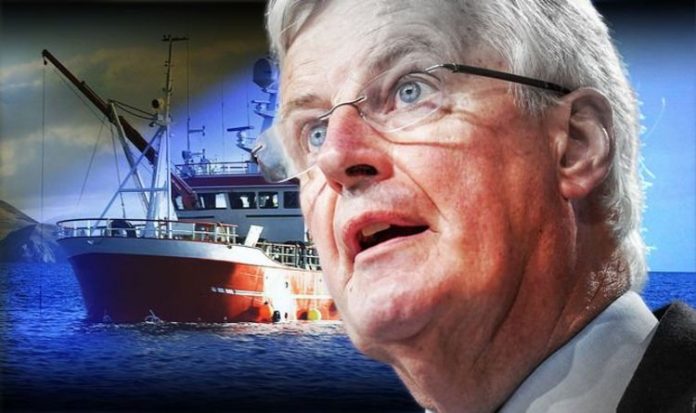 Although no agreement has been signed between the two sides, there have been indications from Brussels that concessions must be made by European nations in order for a Brexit deal to be signed. Assessing the state of trade talks, chief executive of the National Federation of Fishermen’s Organisation, Barrie Deas, revealed he expects a deal to soon be signed. Speaking to Express.co.uk, he also highlighted when Britain was given a huge boost in negotiations with the EU on the UK’s rich fishing waters.

The UK and Norway signed a deal on fisheries on September 30 and it is that agreement, Mr Deas believes, is what placed Britain in a much stronger position.

He said: “What the UK-Norway agreement does is underline how normal coastal states behave towards each other.

“It just underlines that the EU position is the outlier, it’s the aberrant.

“All the ingredients for coastal state agreement are there you know.

“I think, has been extremely helpful to the UK case.”

Under the agreement, the two sides will hold annual negotiations to agree on access and fishing quotas.

The agreement will initially run for six years before then being renegotiated for another four-year period.

It also carries the ingredients of what Lord David Frost has demanded from the EU.

However, EU states, namely France have demanded continued access to the UK’s waters under what they have benefited from within the Common Fisheries Policy.

France is also a part of the ‘Group Eight’ which rely heavily on the UK’s fishing waters.

Due to that, Michel Barnier held talks with fisheries ministers from those states to ask them to drop their demands.

In a major breakthrough, in the current Brexit process, both sides agreed to resume talks this week.

Talks will now take place daily as the two sides look to agree to a deal in time for it to then to be ratified by the EU Parliament.