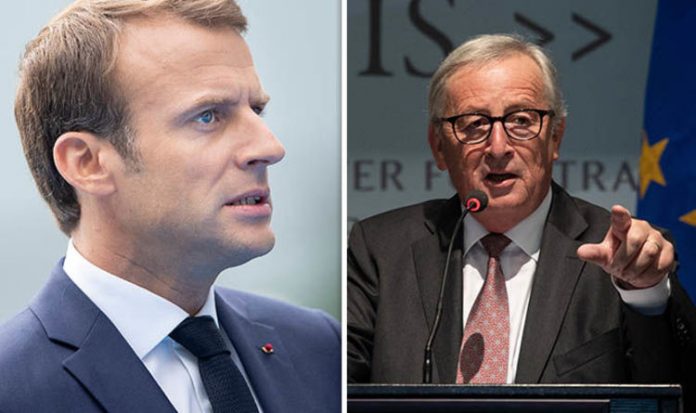 Emmanuel Macron’s government has become the fiercest opponent of London within the EU by constantly vetoing any British proposals for the Brexit deal.

In fact Paris was the most critical towards Theresa May’s white paper, which put forward a soft Brexit expected to please the EU.

But this hardline stance, which aims at poaching businesses and markets from the UK, is leaving France “isolated” within the EU27.

An EU diplomat who asked to remain anonymous told The Sun: “Not every member state has the same position on everything, especially Brexit.

“There’s one country that’s very hard on the British and that’s France.

“France is a little bit isolated in its opinion.

“They’re the toughest but I don’t know why because the French have much more interest in Brexit than others.”

This revelation comes as Foreign Secretary Jeremy Hunt has appealed to France and Germany to make the European Commission strike a “sensible” trade deal with London and avoid a no-deal Brexit.

According to the newly-appointed minister, the possibilities the UK will crash out of the EU without a deal are “increasing by the day”.

Such an outcome would cause job losses across the whole continent and hit EU businesses based in the City of London, he argued.

He told the Evening Standard: “The probability of No Deal is increasing by the day until we see a change of approach from the European Commission who have this view that they just need to wait and Britain will blink.

“There is real chance of No Deal by accident. Everyone is assuming, no, no, no, this will never happen. Well, actually, it could.

“France and Germany have to send a strong signal to the Commission that we need to negotiate a pragmatic and sensible outcome that protects jobs on both sides of the Channel because for every job lost in the UK, there will be jobs lost in Europe as well if Brexit goes wrong.”

As negotiations become more and more difficult between Brussels and London, the possibility of extending the transition period is losing appeal.

An EU diplomat said: “People are asking why extend the transition forever while an FTA is negotiated? That sentiment is now gaining traction.