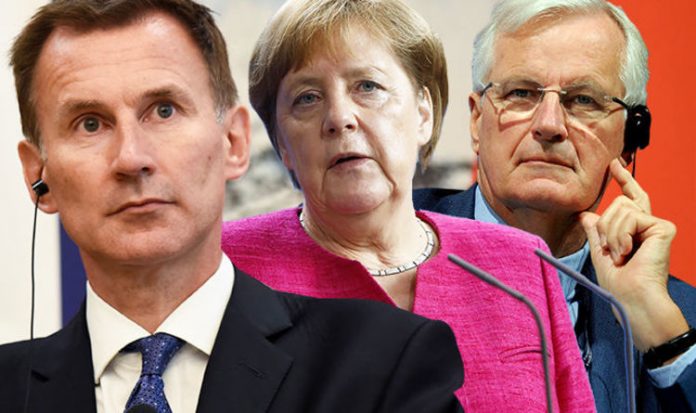 The new Foreign Secretary warned Brussels’ most powerful countries Germany and France they must “send a strong signal” to the European Commission or “jobs will also be lost” in their countries if the UK crashes out of the EU without a deal.

Warning that the possibility of a no deal is “increasing by the day” Mr Hunt said EU bosses had underestimated Theresa May’s steel because the Prime Minister Theresa May will not “blink”.

He said the UK leaving Brussels without a deal risked chaos on both sides of the Channel and EU businesses would be hit.

He said: “France and Germany have to send a strong signal to the Commission that we need to negotiate a pragmatic and sensible outcome that protects jobs on both sides of the Channel because for every job lost in the UK, there will be jobs lost in Europe as well if Brexit goes wrong.”

Jeremy Hunt warned a no deal scenario would be an economic “tragedy” for the Continent – not just the UK – and that it would “change British public attitudes towards Europe for a generation”.

He told the Evening Standard: “The probability of No Deal is increasing by the day until we see a change of approach from the European Commission who have this view that they just need to wait and Britain will blink. That is just a profound misunderstanding of us as a nation.

“There is real chance of No Deal by accident. Everyone is assuming, no, no, no, this will never happen. Well, actually, it could.”

“Probably the City of London, as the financier of European business, is the central point to make here. If it became harder for European businesses to access finance, that is far from trivial.

“The City itself would find a way to thrive, whatever the outcome of the Brexit negotiations … if it became a low-tax, low-regulation, offshoot fully outside the EU.

”But for European businesses the impact would be profound.”

His warning comes after it emerged Mr Macron asked Mrs May to join him for talks this Friday at the French President’s glamorous official summer holiday retreat in the south of France.

Mr Macron, a staunch Europhile, is understood to be pursuing a hardline stance against the UK in Brexit negotiations, with active steps to lure City of London financial jobs to Paris.

The French leader and his allies have rejected a number of compromises put forward by British officials, according to Brussels sources.