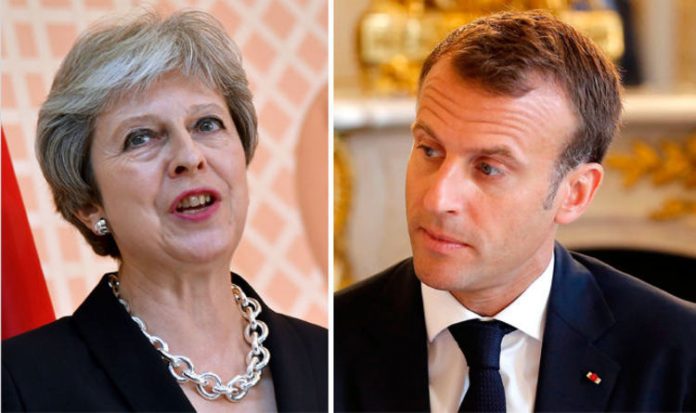 William Hague has argued France has a lot to lose if they maintain their hardline negotiating position, and argued it would be a “mistake” if Britain leaves the EU without a deal.

The former Conservative leader thinks France is currently “the biggest national obstacle to a Brexit deal” and called on the country to start negotiating on issues such as “an open Irish border, a mutually acceptable customs system and how to share military satellite facilities”.

Writing in the Daily Telegraph, Mr Hague said the French President will likely be obliged to make a decision on his Brexit stance when he returns from his summer break.

Mr Hague suggested: “When Macron returns to the Elysée later this month, there will no doubt be a memo waiting for him about the British effort.

“I expect it will read, if translated, something like this: The British are valuable friends, but they are not going to end their military and intelligence work with us however Brexit turns out.

“And you, Mr President, are now the foremost advocate of EU integration and unity, so you should not try to override Michel Barnier, a respected French negotiator, to give more of a special deal to the UK.

“Finally, if the ‘no deal’ scenario they are warning us about happens, there is a good chance their Parliament will defer leaving, or order another referendum, leading to utter chaos in Britain but an object lesson in what happens if you try to leave the EU. We should maintain a hard line.”

The former Foreign Secretary warned that France could find itself losing out following the UK’s departure from the bloc if they decide to maintain their inflexible position.

Acknowledging pessimistic predictions by economists which suggest the UK could suffer following Brexit, Mr Hague said: “But they do say everybody loses, including many European businesses. Is France so sure of an expanding economy that it can afford that?

“There are countless other reasons why a French leader should worry about what might happen: the hundreds of thousands of citizens potentially caught in legal limbo in either country, and the disruption caused to ports and airports, or at minimum the consequences of widespread expectation of such disruption.”

Mr Hague notes the relations between France and the UK are generally good, and said he relied on the French during his time in the Foreign Office.

He added: “There is much warmth and reassurance in standing together with France.

“In my years as Foreign Secretary, my first phone call to the continent in a crisis would always be to my French counterpart.”

But the relationship has been strained by the Brexit negotiations.

Lord Hague continued: “France is the biggest national obstacle to a Brexit deal and the key country to unlock a change of attitude in the European Commission.

“What they will have found is that the love-hate relationship between the British and the French lives on in ministerial form.

“The French elites – and they are still in power for now – believe the lesson of history is that they need European unity above all else, with themselves in the vanguard of creating it.

“Like us, they try not to choose between their conflicting feelings about a historic foe, but when they have to, they put Europe’s unity and a chance to get ahead of the UK before their fondness for us.”

Lord Hague predicts France won’t relent on their hardline stance, but says if he does, Mr Macron would provide “a small flame of statesmanship” in “a European scene steadily darkened by inflexibility and lack of leadership”.

Emmanuel Macron, like Theresa May, is currently on summer break.

Brexit negotiations are expected to re-start in earnest from September in the hope of finding a deal by March.