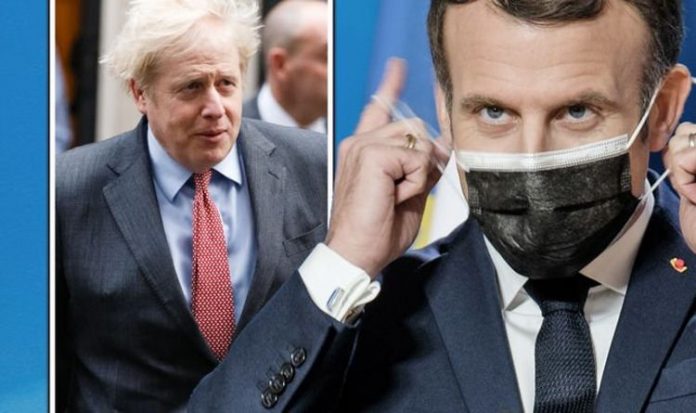 Brexit trade talks have stalled this week over the issue of fisheries, with the EU digging their heels in on their demand for access to UK waters after the end of the transition period. With the deadline fast approaching, the Ministry of Defence confirmed four 80-metre armed vessels had been placed on standby to guard British waters from EU trawlers on January 1 if no agreement on fishing rights was reached. Mr Johnson’s stance was criticised by senior Tories including Tobias Ellwood, Conservative chair of the Commons defence committee, who called the threat “irresponsible” when attention should be focused on striking a deal.

However, several EU countries have been known to use warships in fishing disputes, and France once even sent one of theirs to a UK port unannounced after an incident escalated in 1972.

During the Sixties and Seventies, tensions between the UK and its southern neighbour were on the rise due to repeated illegal fishing in UK waters by French vessels.

Between 1964 and 1972, 37 French fishing vessels were detained and brought into UK ports, 36 of whom were charged and convicted of illegal fishing in British waters.

Boris Johnson has threatened to deploy Royal Navy ships to patrol UK waters in the event of no deal (Image: GETTY)

READ  Boris Johnson urged NOT to betray UK fishing by Thatcher minister: 'It's not about money!' | UK | News (Reports)

In 1972, Edward Heath had just agreed for the UK to enter the EEC, but tensions over fishing had reached boiling point.

Documents unearthed in the National Archives by Express.co.uk reveal how one particular incident blew up.

It all came to a head when British fisheries protection vessel HMS Kellington arrested a French trawler called ‘Athos’ for illegally fishing in British waters on March 24, 1972.

The next day, the French warship ‘L’Agile’ descended on the Port of Fishguard, Wales, without giving any prior warning to the UK Government or local naval commander.

This was because the trawler had requested French naval officers to come as witnesses to give evidence on their behalf.

The ship ‘L’Agile’, which should have informed the local naval authorities of its intention straight away, instead arrived unannounced as a surprise to not only the local naval commander, but the Ministry of Defence, and the Foreign Office.

Labour MP George Cunningham asked Peter Kirk, Under-Secretary of State for the Navy, whether he would stand for this behaviour.

He asked: “Is it not highly unusual practice for a foreign state to send one of its warships into a British port following the arrest of a merchant vessel and the trial of its captain in the British port?

“Has the Under-Secretary observed that the captain of the French ship said that, though unusual, this practice might have to become normal?

Mr Kirk admitted that it was unusual for the French Navy to arrive unannounced on the UK shore.

He replied: “The drill for fishery protection vessels like L’Agile is for us to be given an outline programme in advance.

“We are supposed to be given 24 hours notice of a call. This call was rather unusual and unscheduled.

“We are discussing with the French authorities the circumstances in which notification might be given in the future.”

While he acknowledged that the French had not followed the agreed rules on this, he noted that there may need to be a review of the current processes, which appear to be too inflexible.

After this conversation, Mr Cunningham wrote to Mr Kirk to complain about “the substance of the point” as well as the way in which he answered the question in Parliament.

He argued that Mr Kirk had not been forthcoming in his response, and that it was “not good ministerial practice” for it to have taken a second prompt to get the information.

Mr Kirk responded that he had not meant to be evasive, but that he viewed the French actions as acceptable.

However, it was confirmed that L’Agile should have given notice as soon as it knew of its intention to moor at Fishguard.

Under-Secretary of State for the Foreign Office Anthony Kershaw insisted it was not necessary to make an official protest to the French government about the incident.

Meanwhile, the skipper of the French trawler that started the row was found guilty, fined £200 with £30 costs and his catch ‒ valued at £1,500 ‒ confiscated.

This incident shows that it has always been the case that both the UK and France, among other European nations, use their Navies to maintain order in the waters around their countries.

It also demonstrates how the French went one step further and actually sent its warship into a British port with no prior warning.

With this sort of history, the Royal Navy merely patrolling its own waters could seem like a reasonable course of action.