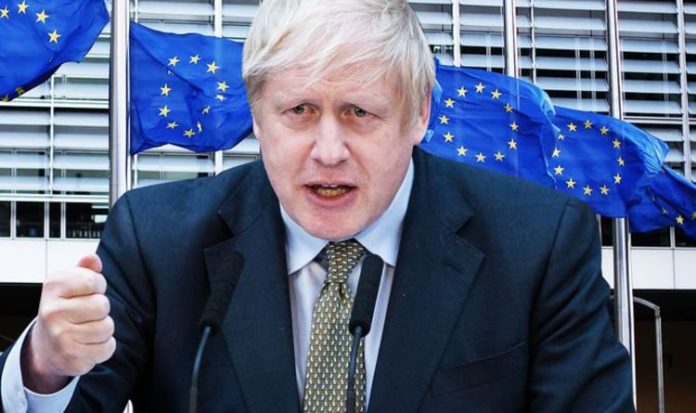 Former Brexit Party MEP Ann Widdecombe argued that under the Withdrawal Agreement Northern Ireland would have to obey EU rules. While speaking to Jonathan Saxty on BrexitWatch, Ms Widdecombe argued Boris Johnson had solved one problem only to create another by sticking with the current Withdrawal Agreement. She noted that Boris Johnson was elected to get Brexit done but was free to do so in any way he felt.

Ms Widdecombe said: “Northern Ireland and the DUP have been betrayed completely.

“That is the situation that we are in right now.

“Boris Johnson has an enormous majority and he was elected to get Brexit done.

“Sadly, he was not elected to get Brexit done on any specific set of terms.

DON’T MISS: Brexit FURY: Boris told to ‘get a grip’ on Brexit by Ann Widdecombe

“So really it has been all up to Boris and in order to solve one border problem he has created another.”

Ms Widdecombe warned a new trade deal with the current Withdrawal Agreement as a base could result in the splitting up of the United Kingdom.

She said: “There are all sorts of intricacies with the Withdrawal Agreement, and I’m particularly exercised by the situation in Northern Ireland.

“We had a manufactured problem with regard to the border between the north and the south.

“According to this protocol, Northern Ireland is going to have to obey EU rules on things like VAT while the rest of us don’t.

“I never saw a clearer recipe for the break-up of the UK than that.”

So far, Brexit trade talks with the EU have proven unsuccessfully as both sides have publicly claimed little progress has been made by way of a trade deal.

Ms Widdecombe insisted at this point it was prudent the UK prepared for a no deal Brexit to ensure the best future for UK businesses.