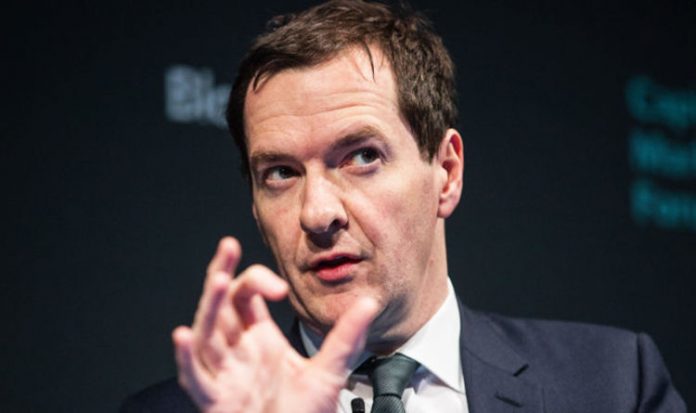 Mr Osborne is now editor of the London Evening Standard after he was fired from the Cabinet by Theresa May after the 2016 referendum.

The Remoaner is also partly responsible for the phrase “project fear” after he predicted immediate disaster and recession for the UK following a vote to leave the EU.

Speaking to GQ Magazine, Mr Osborne was asked where hard Brexit will be a year from now, he replied: “I think the Brexiteers are essentially being found out.

“They promised this nirvana, this taking back control, so suddenly we’d be in charge of our money; our borders, our immigration policy and all that.

“But the actual result is that they can’t make a decision because the real cost of leaving the EU and the single market is so high they don’t dare do it.”

The newspaper editor also claimed the UK will only leave the EU in name only.

He added: “So they keep putting off the decision. While we legally leave in March of next year, we’re not actually leaving any of the arrangements.

“The irony is that the only thing we will leave next year is the room where the decisions are taken.

“We at least used to be in the room arguing from Britain’s corner.”

He also claimed the UK will be in a permanent transition and the idea Britain can leave the bloc simply is unrealistic.

He continued: “We are in a kind of permanent transition. We are unable as a country, rightly if you like, to stomach the cost of leaving.

“So we put off the practicality for years and years to come.

“This view that we just need to get Brexit over and done with so we can talk about other things is totally unrealistic.”

He was pressed about what he thought about Theresa May.

Mr Osbourne tried to avoid the question and said to refer to editorial pieces in the Standard.

But eventually, he said the party could need new leadership: “If the Conservative Party does not try to reconnect with modern Britain, with urban, ethnically diverse, sexually diverse Britain, it is politically screwed.

“The current leadership needs to find a way to reconnect or we will need new leadership.”