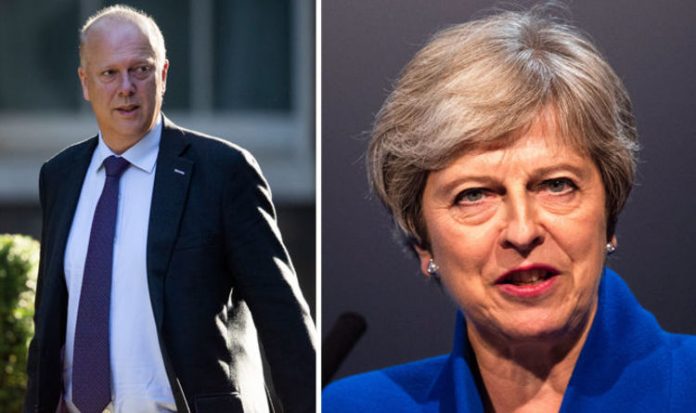 The suggestion was made by the Brexiteer during a Cabinet meeting where ministers discussed the best way to overcome any economic problems of leaving the EU without a deal.

According to The Times, a witness to Mr Grayling’s suggestion said that Liz Truss’s “face was a picture”.

At the same meeting, Home Secretary Sajid Javid discussed pro-business emergency measures to keep the economy if there were to be a no-deal Brexit.

The revelation comes the day after Brexit minister Dominic Raab said that Britain and the European Union were “closing in” on a withdrawal agreement.

Both London and Brussels are still hoping to reach a deal by mid-November but there is an increasing concern that the UK could leave without a formal deal.

Last week the Government published a series of advice for Britons on how best to prepare for the possibility of a “no-deal” Brexit.

In July, Mr Grayling co-wrote an article for The Telegraph with Philip Hammond where he backed Theresa May’s Chequers plan and said it was a “vision that respects the referendum result, strengthens the union, maintains security and ensures our future prosperity.”

Mr Grayling’s call for a Brexit bonus comes as the Bank of England governor Mark Carney has waned of rising inflation, increased unemployment and a 35 per cent fall in house prices in the event that Britain leaves the EU without a deal.

The governor claimed that the 2016 vote had knocked one percent off the seize of the economy.

Prime minister Theresa May has said that she will consider paying the £39 billion Brexit divorce bill if the UK is unable to reach a deal as she would honour its international commitments.

There has been a warning that a no-deal Brexit could mean that UK drivers could need an international driving permit to drive in the EU.