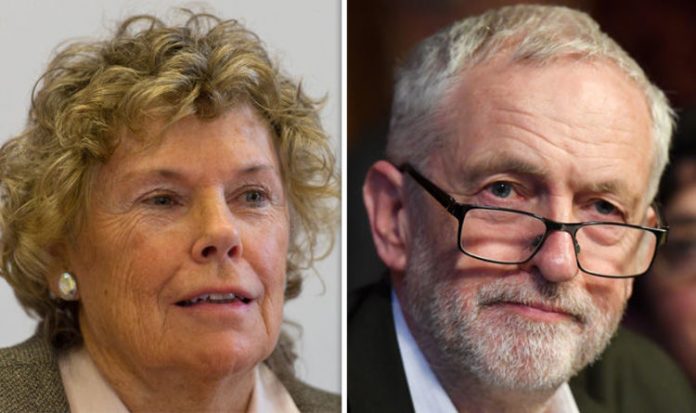 “That’s why, in a way, having Jeremy there is very important on that particular issue because I think both he and John McDonnell, who were at every single lobby with myself and others over the period of the last 25 years on EU matters understand from a different perspective why leaving is important.”

Ms Hoey stressed the importance of achieving a much-vaunted “Canada +++” deal with the EU rather than Mrs May’s Chequers proposals, which is widely seen by Leavers as keeping the UK too closely tied to Brussels.

She told the Telegraph: “I think it will be extremely bad for our normal, functioning democracy if Brexit doesn’t happen.”

Some Remainers, including many MPs, continued to characterise those who voted Leave as motivated by racism, and believed they would eventually change their minds, Mrs Hoey said, attitudes she described as “complete rubbish”.

She said: “I think people will feel very, very angry if Brexit doesn’t happen and it will likely result in a rejection of politics and politicians.”

Mrs Hoey, one of a handful of Labour MPs who have consistently voted with the Government when it comes to Brexit legislation, is facing deselection from her Vauxhall seat as a result of her persistent defiance.

And in an indication of her maverick tendencies, she is planning to team up with Mr Farage at a Leave Means Leave rally in Bolton on September 22 which will seek to take a wrecking ball to Mrs May’s Chequers plans.

She said: “I have absolutely no objection to Nigel being involved.

“I’ve seen him at rallies. I know that people come out to hear him.

“I don’t always agree with every word he says but I would not want to be an acquaintance with someone I really felt was a racist.”

Mr Corbyn’s lukewarm attitude towards staying in the EU was noted during the 2016 referendum campaign.

Prior to this he was a frequent critic of Brussels.

He described the Maastricht Treaty of 1993, which established the European Union as an entity and pushed for greater economic and political union as “taking away from national parliaments the power to set economic policy and hands it over to an unelected set of bankers”.

However, he currently favours the UK remaining in a customs union with the EU, in order to retain tariff-free access to the bloc.

In an article written to coincide with a report on Brexit and customs prepared by his think tank, the Tony Blair Insitute for Global Change, he said: “The Remainers, however, have now cottoned on to the fact Labour is not really for remaining either, except in the very limited sense of the Customs Union, and so, unsurprisingly, they’re losing faith in Labour as a route to avoid Brexit.

“The Labour Party will pay a heavy price for the leadership’s closet Euro-scepticism.

“The tragedy is the price the country will pay for Labour’s failure to lead.”