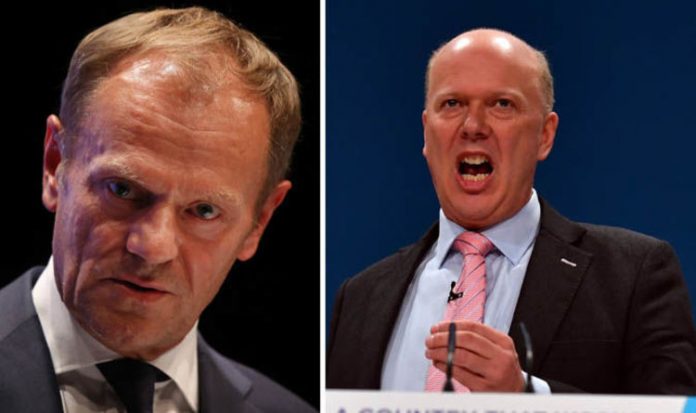 Mr Grayling, who supported Vote Leave during the EU referendum campaign, branded the demands on Northern Ireland made by Brussels “impossible” for the UK to accept and urged the EU27 to soften their negotiating position.

He said: “What the European Union is asking in and around Northern Ireland is actually impossible for the UK to accept.

“If they stick with that position, there will be no deal.

“There are things that I wouldn’t personally accept, but nor would the Prime Minister.

“We’re not going to accept a border between Northern Ireland and the rest of the United Kingdom.

“We are now preparing hard for the option of a no-deal Brexit. We don’t want to get there, we don’t expect to get there.

“But our European partners if they want to reach a deal, have to find a way of understanding that there are some things we cannot accept.”

The president of the European Council, Donald Tusk, unexpectedly declared yesterday at the end of a tense summit in Austria that the Brexit proposal drafted by Mrs May would “not work”.

The EU27 also set an October deadline for a solution to the Irish border issue, despite the Prime Minister confessing just hours before during a private meeting with her Irish counterpart Leo Varadkar she felt it was “impossible” to come to a compromise in just a few weeks.

Speaking to reporters after the summit ended, she said: “Our white paper remains the only serious and credible proposal on the table for achieving that objective.”

The Prime Minister also argued the criticism to her Chequers plan was just part of a negotiating strategy.

She said: “I have always said these negotiations were going to be tough.

The Chequers proposal would see the UK sharing a common rulebook for goods and services after Brexit to avoid the return of customs checks at the Irish border.

But European leaders think such an arrangement would give Britain a competitive advantage.

The rejection of her plan unleashed Tory Brexiteers’ demands to chuck the Chequers and take a harder stance against the EU.

Jacob Rees-Mogg wrote on Twitter that Chequers went “pop”, before demanding Mrs May pursue a “Canada plus free deal.”

He said: “It is clear what the EU tactics are now.

“Parliament was very unlikely to support Chequers, it certainly will not allow more than Chequers.

“Now is the time for the prime minister to reset the negotiation and take Tusk’s March offer of a free trade plus deal.”