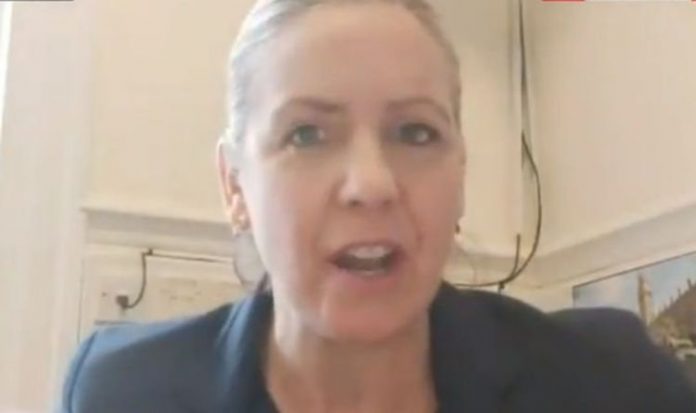 Boris Johnson set a five-week deadline for trade talks to succeed in time for the transition’s end on December 31 amid reports the Prime Minister is planning to override elements of the Brexit Withdrawal Agreement. This sparked a row between Labour MP Chris Bryant who claimed Mr Johnson is a “liar”. Andrew Jenkyns hit out at his comments in a fiery exchange.

Speaking to Sky News, Ms Jenkyns said: “To pick up on Chris’s point, I noticed on social media earlier that you made out our Prime Minister is a liar.

“But it’s a negotiation, you try to improve on things and let’s face it, the EU has not stuck to anything in this negotiation.

“Back to Chris Bryant, how dare you call the Prime Minister a liar when look at your party.

“You came out to actually say you’ll honour the referendum result then you’ve spent the last three years to thwart Brexit and stop it happening.

“Then what do you do? You elect the biggest arch-Remainer in your party.

“Your constituency voted to Leave like mine did and I see that you talk about the 2019 election which was actually a Brexit election.”

Mr Bryant responded: “No, the Prime Minister is a liar, it’s a proven fact.

“In a sense, I don’t care about him lying as an individual but what I do worry about is now Britain is getting a reputation for being a country that doesn’t stand by its word.

“We signed a treaty, the British Parliament voted through the withdrawal agreement on December 20, 2019.

Sir Jonathan Jones’s departure was confirmed by the Attorney General’s Office, which declined to comment on the reason for the latest exit in a string of resignations of top civil servants.

The Financial Times reported on Tuesday that Sir Jonathan was quitting as the department’s permanent secretary due to a dispute with Downing Street.

Two Whitehall officials were said to have told the paper that he was departing over concerns the Prime Minister wanted to row back on parts of the Brexit deal relating to Northern Ireland.

A spokesman for the Attorney General’s Office said: “I can confirm Sir Jonathan has resigned but cannot comment further.”