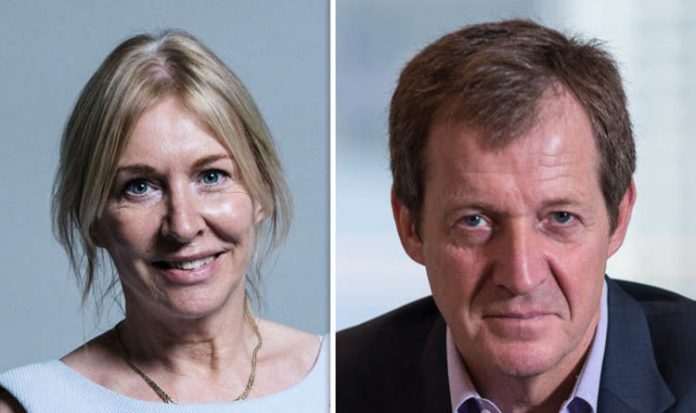 Speaking on ITV’s Peston on Wednesday, she said: “The Irish border question has got to stop being put forward as a red herring.

“The Institute of Economic Affairs (IEA) produced a paper this week which showed quite clearly that this is being put forward as a red herring, which is being weaponised and is being used to obfuscate and make the negotiations more difficult.”

In a bold statement, she added: “The Irish border issue does not exist.”

Alastair Campbell, Tony Blair’s former political advisor, retorted sharply, stating: “The Irish border problem is real, and if there was a solution to it we would have found it by now.”

In a quick rebuke to Ms Dorries and the Brexiteer faction of the Conservative Party, he added: “It is mind-blowing that your wing of your party is so cavalier about the genuine impact on the peace process.

“If you want to wreck the peace process and wreck the UK, that will be on your hands.”

Ms Dorries rejected Mr Campbell’s statement, and noted she was simply trying to “deliver on what people voted for” in the 2016 EU referendum.

She also pointed to the ‘maximum facilitation’ model as a viable solution to the ongoing deadlock surrounding post-Brexit trade between Northern Ireland and the Republic of Ireland.

She said: “We need the modern technology that we have available to monitor and chart traffic and goods going across.

“People talk about the Irish border rather than talking about a hard border, or the Irish ‘backstop’. We don’t need any of those.”

The ‘maximum facilitation’ option would see the UK implement technology and a ‘trusted trader’ plan to reduce post-Brexit customs checks by monitoring goods and vehicles passing across the Irish border.

Critics have nevertheless argued the implementation of the system will take too long due to a lack of adequate technology, and warned it could reintroduce a degree of friction at the border, threatening further violence in Northern Ireland.

Ms Rudd said: “I think there are conceivably about 40 of us in the Tory Party who would not support a Canada-style deal.

“To be frank, there are so many reasons why the Canada-style deal would not work, starting with the Irish border, going onto manufacturing.

“That just reinforces the point that there is an impasse.”

Ms Dorries responded defiantly: “If you think we are going to fall off a cliff with ‘no deal’, then that is something we need to vote for.”