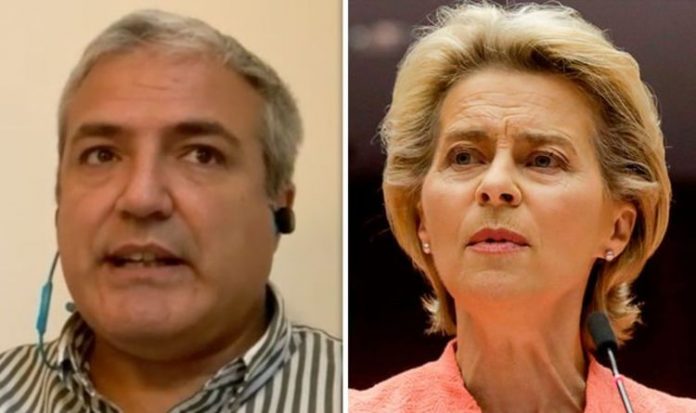 After a call with Prime Minister Boris Johnson, European Commission president Ursula von der Leyen, claimed “big differences remain to be bridged” in talks to reach a post-Brexit trade deal. Ms von der Leyen warned it will be “very challenging” to overcome differences, particularly on fishing rights in UK waters. According to a No 10 spokesman, the Prime Minister said a no deal scenario was “very likely” unless the EU position changed “substantially”.

Downing Street said: “He [Mr Johnson] said that we were making every effort to accommodate reasonable EU requests on the level playing field, but even though the gap had narrowed some fundamental areas remained difficult.

“On fisheries he stressed that the UK could not accept a situation where it was the only sovereign country in the world not to be able to control access to its own waters for an extended period and to be faced with fisheries quotas which hugely disadvantaged its own industry.

“The EU’s position in this area was simply not reasonable and if there was to be an agreement it needed to shift significantly.”

Talks in Brussels will continue on Friday, with two weeks to go before the UK leaves EU trading rules.

The call comes as Cabinet Office Minister Michael Gove told peers trade deal talks “may go on until after Christmas”.

As tensions continue to rise while the clock ticks down, in an exclusive interview with Express.co.uk, Italian MEP Marco Campomenosi claimed the EU is to blame for Britain’s departure from the bloc.

He said: “I miss a figure like Nigel Farage in the European Parliament.

“He had a dialectic ability that not many people have.

“Beyond political issues and divisions, I think he was a character who was able to make everyone question themselves – even the europhiles.”

Mr Campomenosi added: “Unfortunately, Brussels did not manage to grasp the teachings that came from the things Farage denounced.

JUST IN: Denmark’s fishing scandal ‘should have strengthened UK’s hand’

“It does now want to give Britain back its fishing rights.

“The other sticking points are not as crucial, so it seems like Macron will decide how things go.

“However, MEPs have been told to prepare for an extraordinary session of the European Parliament just before or immediately after Christmas.”

He noted: “This means that despite all these latest warnings of a no deal scenario, the possibility is very real.

“From what I heard, I think the deal will come true and I would bet money on it.

“In Europe, many member states have realised that they cannot afford otherwise.

“Italy, France and Germany have all got so much to lose if there is a no deal.”