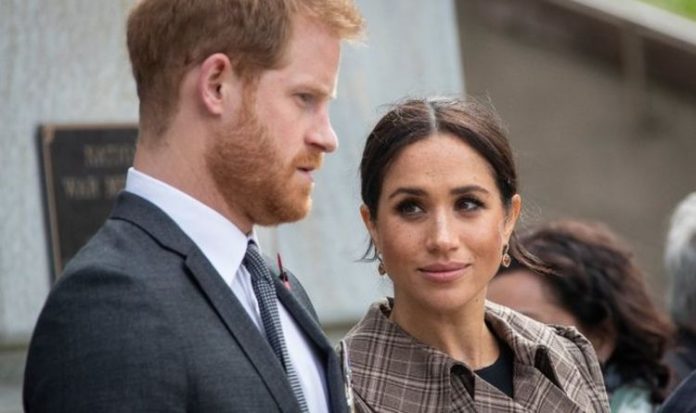 The Duke and Duchess of Sussex’s new production company, Archewell Audio, has gone into partnership with Spotify for an undisclosed sum. But the multi-year deal, likely to be worth tens of millions, has led to an outcry from artists who feel ripped off by streaming services.

Eurovision winner Sandie Shaw told the Daily Mail: “Lucky Meghan and Harry were able to negotiate a podcast deal for themselves with Spotify.

“I wish recording artists were in the same independent position to negotiate streaming deals directly for themselves too.”

Gomez singer Tom Gray said: “Young artists on Spotify would be lucky to make enough from streaming to pay their food bill, if that.

“This is probably something Meghan and Harry haven’t thought about, but it does call into question the ethics of the streaming platforms if they keep behaving like this, where they suddenly find tens of millions.

Meghan and Harry have signed a lucrative deal with Spotify to host and produce podcasts (Image: GETTY)

The Duke and Duchess of Sussex’s new production company, Archewell Audio, has gone into partnership with Spotify for an undisclosed sum (Image: GETTY)

“[Spotify’s] argument is, ‘We take all of this money and give 70 per cent of it out to the rights holders’, so where is all this extra money coming from to buy out Meghan and Harry?

“If you are working in music at any level now you just feel let down by the system.”

Jazz and hip-hop artist Soweto Kinch added: “It’s a travesty that in a year when most musicians and creators are seeing our livelihoods implode, Spotify have cut such a tone-deaf deal.

“I love the Sussexes, but this just underlines how lazy and opaque the world of streaming is.”

READ MORE: Meghan and Harry spurn 2021 UK return as Sussexes too ‘busy in US’

Meghan and Harry’s Spotify deal was announced earlier this week.

It comes just months after they signed a deal with Netflix rumoured to be worth more than £100million.

The Queen’s grandson and the ex-Suits star said: “What we love about podcasting is that it reminds all of us to take a moment and to really listen, to connect to one another without distraction.

The Queen’s grandson and the former actress are living in an £11 mansion in California (Image: GETTY)

Harry and Meghan will host a “Holiday Special” which is due to be released in the coming weeks.

A trailer on Spotify’s website opens with Harry saying: “Shall we start? Ladies first?”

Meghan adds: “No, say it because I think it sounds really nice with your accent.”

She then explains: “One of the things my husband and I have always talked about is our passion for meeting people and hearing their stories.

Meghan and Harry quit royal duties earlier this year for a new life in the US with their young son Archie (Image: GETTY)

“And no matter what the story, they usually offer you an understanding of where someone else is coming from and at the same time remind you in some way of a story about yourself.”

Harry continues: “And that’s what this project is all about, to bring forward different perspectives and voices that perhaps you haven’t heard before and find our common ground.

Meghan continues: “This is also a moment to celebrate kindness and compassion, something we saw in so many places this year, and which will underlie everything you hear from Archewell Audio.”

Speaking about the Holiday Special, says they “can’t wait to share it” and it will be out “later this month”.

Meghan adds: “We’re talking to some amazing people, they’re going to share their memories that have really helped shape this past year which has been, as we know, a difficult one for everyone.”

Harry continues: “So many people have been through so much pain this year, experiencing loss, a huge amount of uncertainty, but it feels worth acknowledging that 2020 has connected us in ways we could have never imagined, through endless acts of compassion and kindness.”

The Queen’s grandson and the former actress are living in an £11 mansion in California after quitting royal duties earlier this year for a new life in the US with their young son Archie.