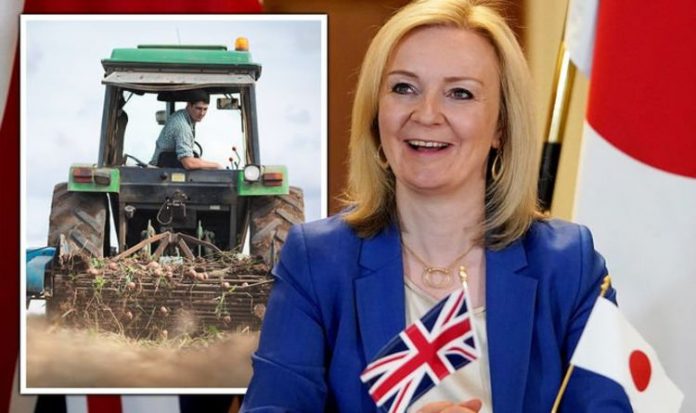 Japan is the “type of country [the UK needs] to look for” to do post-Brexit trade deals with, according to the Vice President of the National Farmers Union (NFU). Tom Bradshaw spoke to Express.co.uk about the impact of Britain’s first major trade deal as an independent trading nation on the farming industry. International Trade Secretary Liz Truss had praised the “excellent” agreement, claiming it would benefit many British industries.

Mr Bradshaw said: “The Japan trade deal is actually quite interesting because it’s a trade deal that really values quality and prominence.

“So I think they’re the type of country we need to look for.

“The major global agricultural powerhouses like Australia, America and South America would be quite concerning.

“They do have different regulatory standards and that means they are producing probably to lower standards than we are.”

He continued: “It would be unfair competition for us to have to compete with them on the global stage.

“If you look east to countries like Singapore, places like Hong Kong, and then the growing economies of India and China, countries that really value traceability, prominence and quality, I think they’re the exciting markets.

“Those markets are dramatically in growth and are becoming more westernised in their nature.

“I think those are really exciting markets for us to be looking to access in the future.”

He added: “If we’re able to protect our standards, as there’s been a huge debate about, then we’re not scared of a trade deal with anyone.

“But if the trade standards are going to be undermined, then it means we’re a lot more concerned about some of those trading relationships.”

Ms Truss claims that the new deal will bring £15billion of extra trade with the UK and Japan in the future.

That is set against a no deal Brexit outcome, not how things are at the moment.

She described it as a British-shaped deal with particular benefits for the tech industry, the creative industries and for food and drink.