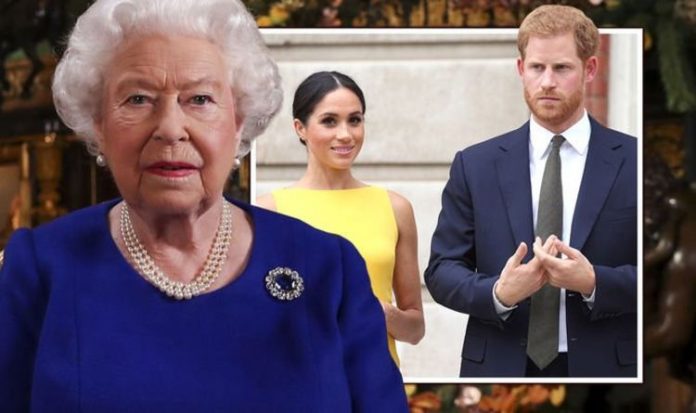 Royal Family expert Marlene Koenig reflected on the possible messages the Queen could incorporate into her 2020 Christmas speech. During an interview with Express.co.uk, Ms Koenig insisted the speech would be uplifting and promote an attitude of togetherness. She also claimed that despite the speculation surrounding whether Meghan Markle or Prince Harry will get a mention during the Christmas address, the Queen will focus on more important issues.

Ms Koenig noted that it was possible an image of the Duke and Duchess could appear on the table during the address but added this was usually reserved for those in the direct line of succession.

Ms Koenig said that due to the impact of coronavirus throughout the year, the Queen may place photos of members of the Royal Family who took part in honouring front line workers.

She said: “Anything is possible. If you look at Christmas speech photos throughout the years, the focus is on usually the direct line of succession.

“Last year’s included Charles as well as the Queen’s father but sometimes special events such as a wedding and in 2018, a photo from Harry and Meghan was included.

DON’T MISS: Queen news: ‘Royals only there as long as public wants them’ – Expert

“I won’t be surprised if a photo from Beatrice’s wedding is included this year.”

“I do not make predictions, but the Queen could include a photo just to show support, but Meghan and Harry have not been in the UK for a year now, no new family photo to show.”

“It is possible but I think we will see the Queen include her immediate line and perhaps, Beatrice and Edo’s wedding because it took place this year.”

“The Sussexes are not being snubbed. If you take the time and look at each year’s photos, you will notice a pattern of focusing on the direct line, immediate family or a big event, such as a wedding.

“Even if Harry and Meghan had not moved to the US, it was unlikely that they would have been included.”

Ms Koenig also went into details of the overall message the Queen will attempt to convey in her Christmas speech.

“I think it is a going to be a speech talking about us all being in it together.

“That is something that the Queen knows about having served in the war, lived through the war.

“I think it will be a speech that tries to be conciliatory and non-political.

“Also because the Queen is deeply religious, there will be a reference to her faith and how faith can get people through these things, which is quite true.”

Ms Koenig closed by saying: “I think it will just be a message that is very uplifting.

“Things like we have been together and we have gotten this far.”