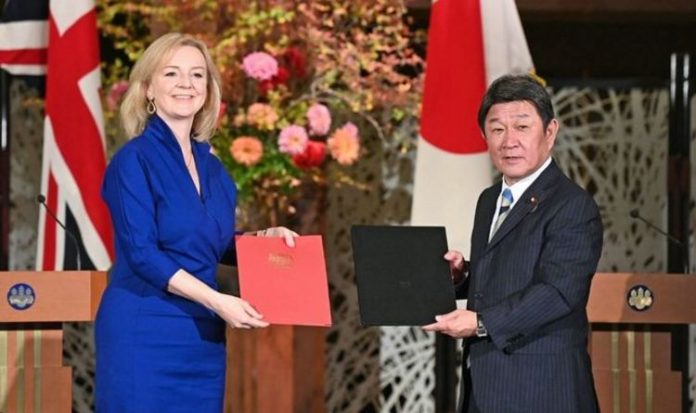 In a letter to Ms Truss, the Shadow Cabinet member said: “For every extra million pounds in exports that British businesses are projected to gain from this agreement, Japanese businesses will gain £5m, and that gap in the projected benefits has increased by a quarter from May’s scoping study to last week’s impact assessment.”

Some officials have stated the UK’s own modelling has not been updated to see the potential benefits of Britain’s services sector.

One aide told the Financial Times: “Our trade-economic modelling leaves a lot to be desired.

“We don’t think our current modelling — which is itself based on methodology from 2011 — properly reflects the benefits of digital and data, tech and services, all of which are areas of the Japan deal where we’ve gone well beyond the EU deal.”

The aide also explained the modelling provided by professor Tony Venables from the University of Oxford, to reflect the current economy, will soon be reviewed.

Under the final impact assessment published by the Government this month, trade exports to Japan are expected to rise by 17.2 percent.

In contrast, UK imports of Japanese goods are set to be boosted by 79.7 percent – or £13billion in comparison to 2019 levels.

The assessment also claimed although bilateral trade is expected to rise in the long-run post-Brexit, UK exports to and imports from all countries will rise by 0.58 and 0.51 percent.

The UK Government also claimed it was a deal which superseded elements of the EU-Japan trade agreement.

Ms Truss said on signing the deal: “Today is a landmark moment for Britain.

“It shows what we can do as an independent trading nation, as we secure modern and bespoke provisions in areas like tech and services that are critical to the future of our country and the reshaping of our economy.

“Trade is a powerful way to deliver the things people really care about.

“At its heart, this deal is about creating opportunity and prosperity for all parts of our United Kingdom and driving the economic growth we need to overcome the challenges of coronavirus.