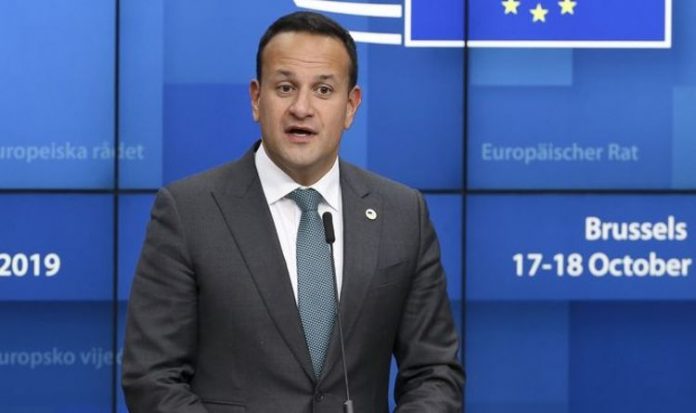 Mr Varadkar, leader of Ireland’s Fine Gael party, expressed relief that a Brexit trade deal had been agreed and called the occasion “a sad but momentous day”. However, he claimed “disputes will arise” in the future and said he believed there would be a need for further agreements.

“Hopefully a deal can be ratified by European Parliament by New Year. But Brexit will never be ‘done’.”

Despite this, Mr Varadkar expressed optimism elsewhere. He said the Brexit deal “came as a relief” to Ireland’s farmers and other exporters due tariffs and quotas remaining off the table.

In addition, he said the deal had succeeded in tackling fears of trade disruption and a hard border which had arisen when the UK voted to leave the bloc in 2016.

The politician added on Twitter: “Four years ago when the UK voted to leave, we feared no deal could cause a hard border in Ireland, end the Common Travel Area with Great Britain, threaten the Good Friday Agreement, our position in the EU single market, disrupt aviation and haulage, and impose quotas and tariffs on farmers, businesses and exporters.

“Years of hard work and diplomacy have protected Ireland from all of that.”

The deal’s agreement arrived just days before the deadline, just on December 31.

After that date, Britain ends its Brexit transition period and will no longer operate under the trading rules it had adhered to when it was a member of the European Union.

Failing to agree a deal would have meant a no-deal scenario, which businesses feared would cause disruption at borders and lead to increased costs due to tariffs.

At the same time, Brexiteers had warned that “no deal is better than a bad deal”.

Businesses are now awaiting more detail on what the agreed 2,000-page Brexit deal will mean for them.

David Frost, the UK’s chief Brexit negotiator, has said the full text of the deal will be published soon, the BBC reports.

Meanwhile, ambassadors from around the EU are due to be briefed on the deal today.

MPs are also waiting for full text to be released before they vote to ratify the deal in Parliament on December 30.