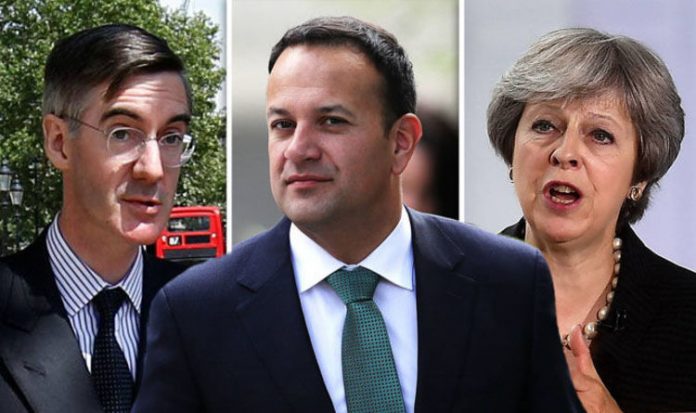 The Irish taoiseach (prime minister) yesterday sent Mrs May a dire warning over the juddering Brexit process following her visit to Northern Ireland and the border.

And he brushed off criticism from Mr Rees-Mogg, who said the Irish leader was an “airhead” for warning British planes would not be able to fly in Irish skies in the event of a no deal.

In response to the comments, which were splashed across the UK media, Mr Varadkar said: “I don’t get bothered about what appears in British tabloids.

“I am always of the view that if somebody engages in name calling it is probably because they don’t want to talk about the substance.

“I am not the slightest bit concerned about some of that language that we are seeing coming out of London.”

He said rather than focus on the criticism his comments sparked, he would focus on talks with Theresa May and the other EU27 leaders.

Mr Varadkar said: “What matters really is what happens between the Governments – the 27 Governments of the EU, the institutions.

“That is all very grown up and civilised.

“Of course there are going to be twists and turns along the way but we are all working very hard to come up with a solution.”

He did, however, send a direct warning to Mrs May, who this week reneged on the Irish border backstop agreed last December.

Mrs May said it was up to the EU to offer a proposal which allowed Northern Ireland to quit the EU along with the rest of the UK without the creation of a hard border in Ireland.

Mr Varadkar responded: “I am very confident that we will avoid a ‘no deal’ hard Brexit scenario. Nevertheless, we must prepare for that possibility no matter how remote it is.

“But if we are going to come up with a solution, a withdrawal agreement with a transition period with a framework for a new relationship with a back-stop, time is short.

“Really people need to get on with it – it is welcome that after two years of waiting we do now have a position from the British Government as to what they want the future relationship to look like.

“What they have put forward is an evolution from their previous position. It is not a solution but I do think it can input into talks.”