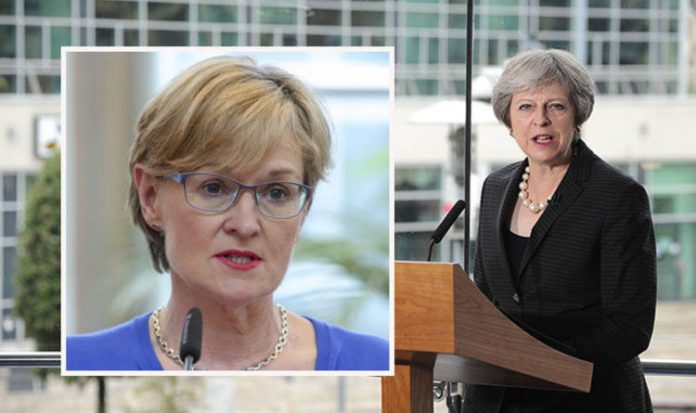 Theresa May this week told Irish and EU negotiations she could not accept any Northern Ireland backstop and said it was up to them to “evolve” their thinking and make their own proposal.

Maireád McGuinness, who is also the vice-president of the European Parliament, hit out at Mrs May in the wake of her Irish border visit this week.

She said Mrs May had boxed herself into a corner with her Chequers agreement, dismissing the White Paper as “a starting point [but] not an end deal”.

Ms McGuinness added: “I think the British prime minister set out red lines too early on and too deeply.

Two years after the Brexit result, Mrs May is still searching for a solution to the Irish border Catch 22: pulling Northern Ireland out of the customs union and single market without creating a hard border with the Republic, which will remain a member of both.

Ireland and Brussels have both vetoed any sort of physical infrastructure on the border, including smart cameras or even CCTV camera which could help be used in remote customs checks.

Mrs May said that following the publication of the Government’s white paper agreed at Chequers, it is “now for the EU to respond”.

She added: “Not simply to fall back on to previous positions which have already been proven unworkable. But to evolve their position in kind.

However the Brussels and Dublin have already made clear the details in the White Paper could never be accepted for reasons laid out almost two years ago.

Adding to frustration in Ireland is the perceived inconsistency in Mrs May’s comments on the Irish border, after she signed up to a backstop agreement in December last year.

Mrs May agreed to the regulatory alignment of Northern Ireland and the Republic of Ireland in the event of a no deal Brexit – something she reneged on within days, declaring “no British Prime Minister could ever agree” to such a situation.

This week Leo Varadkar, Ireland’s taoiseach (prime minster), said he remained confident a Brexit deal could be avoided but in the worst-case scenario Britain had still given Ireland a “cast iron guarantee” to avoid a hard border.