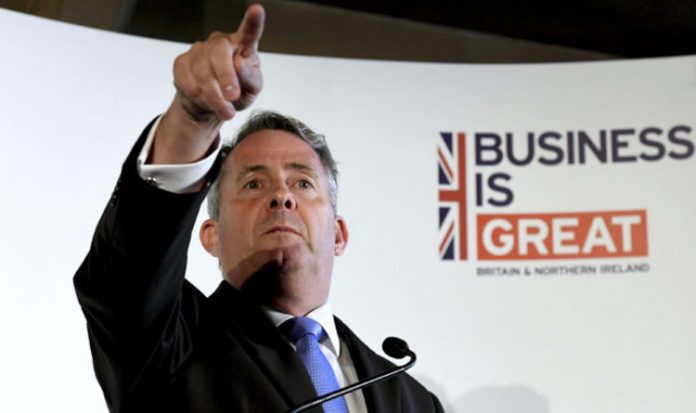 The Brexiteer also took aim at the European Commission’s “theological attachment” to ever-closer union, which he warned would have a “large cost” for EU member states.

International Trade Secretary Mr Fox, arguably the most influential Brexiteer still in Mrs May’s cabinet, also stressed that the 2016 referendum “was not a consultation” – a stance which has won backing from Jacob Rees-Mogg.

Speaking to Business Insider, he said if no agreement had been reached by March 29, 2019 – the day the UK is scheduled to quit the block, Britain should “leave without a deal.”

With time running short, there have been suggestions that Mrs May could need to extend the Article 50 process whereby Britain will leave the EU, with Irish foreign minister Simon Coveney among those who have expressed support for the idea.

But Mr Fox said: “The public have told us, it wasn’t a consultation, to leave the EU, and the public already wonders why it’s going to take more than four years after the referendum for us to fully remove ourselves from the EU.

“To attempt to extend our membership even longer, many voters would regard as a complete betrayal by the political class, and I think they would be right.”

Days earlier Mr Fox said he would have followed the lead of David Davis and Boris Johnson by tendering his resignation had Mrs May’s Brexit deal suggested keeping the UK in the European Customs Union, highlighting the ongoing tension between him and the Prime Minister.

He told the Telegraph: “My view was that we had to have our ability to trade on tariffs and quotas.

“Obviously if we’d stayed in a customs union or single market we would not have had the freedom to be able to manoeuvre and that would have been unacceptable.”

His comments came in the wake of Commission chief negotiator Michel Barnier’s rejection of a key aspect of the Government’s Brexit White Paper which would have meant the UK collecting tariffs on behalf of the EU at the border with Ireland.

Mr Fox said it was “clear” the Chequers proposals would would but that it required “political will” from all sides.

He added: “What the Commission seems to be saying is look, there has to be Brexit on their terms, or no deal at all.

“Now, that may be in line with their own theological attachment to ever-closer union and EU treaties but it may have a large cost to EU member states, the member states who require jobs, prosperity, and trade, because they need to get elected, unlike the Commission officials.

“The EU then need to tell us how they intend to get the frictionless borders that we want to see.

“So they can’t keep rejecting things without telling us exactly what it is they want.”

Mr Rees-Mogg agreed with Mr Fox’s assessment, saying: “Extending Article 50 is the definition of failure for the government.”