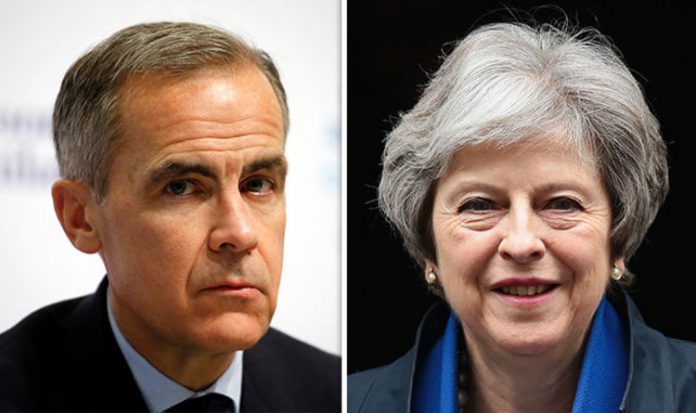 The Financial Times has reported he told ministers if the Prime Minister could strike an agreement similar to her Chequers proposal – where a free trade area in goods and agriculture is central – there would be a huge economic uplift – despite fears of a slump post-Brexit in a no-deal scenario.

Mr Carney made the comments during a special Cabinet meeting on Thursday to discuss plans in the event of the UK tumbling out of the EU without a divorce deal.

He said the Brexit vote from June 2016 had seen the the UK economy shrink by one percent, compared with the Bank’s forecast’s just a month before the referendum, but that a good Brexit deal for Britain could recover most of that output to the tune of £16bn.

Mr Carney said the much-needed positive assessment of Mrs May’s much-scrutinised Chequers plans came from “a pick-up in investment, more people to move jobs, and a pick-up in consumer confidence and underlying activity”.

A Cabinet source told the Financial Times: “Carney said that we would recover three-quarters of the growth lost after the 2016 referendum because Chequers would imply more access to the European market than under current assumptions.”

But during the same meeting with Theresa May and her ministers on Thursday, he warned the Prime Minister the consequences of a no-deal Brexit could be as catastrophic as the financial crisis from 2008 that brought the UK economy to its knees.

Mr Carney reportedly warned of a huge housing crisis in such a scenario, with prices plummeting by as much as 35 percent.

He also highlighted how unemployment figures would reach double-digit percentages, while transport links with the EU, including air and Eurostar train travel, would come to a standstill.

Mr Carney’s latest comments come after he warned last week if Britain tumbled out of the EU without a trade deal, financial difficulties could put the pinch on the incomes of British households for years to come.

The Bank of England’s nine rate-steers voted unanimously to hold rates at 0.75 percent.

This was in line with the expectations of economists in a poll conducted by Reuters, adding that apart from Brexit, there had been very few domestic developments since its last meeting on August.

Earlier today, Brexit Secretary Dominic Raab attempted to provide another much-needed most to negotiations after saying that Britain and the EU are “closing in” on a withdrawal agreement ahead of a meeting of European leaders in Salzburg, Austria next week.

Both London and Brussels are hoping to reach a deal by mid-November, with the EU’s chief Brexit negotiator Michel Barnier providing further encouragement by saying that a deal could be struck “within 6-8 weeks”.

But Britain and the EU still remain at loggerheads over a number of issues, most notably the future of the Irish border.

Mr Raab said after a phone call with Mr Barnier: “While there remain some substantive differences we need to resolve, it is clear our teams are closing in on workable solutions to the outstanding issues in the Withdrawal Agreement, and are having productive discussions in the right spirit on the future relationship.

Michel Barnier took to Twitter to note that he had a “useful dialogue” but there are still differences between the two sides.

He wrote: “Useful dialogue w/ @DominicRaab this morning on the progress our teams have made this week on the #Brexit WA.

“But substantive differences remain on the Protocol for IE/NI, governance and GIs. We are also continuing our discussions to find common ground on the future relationship.”