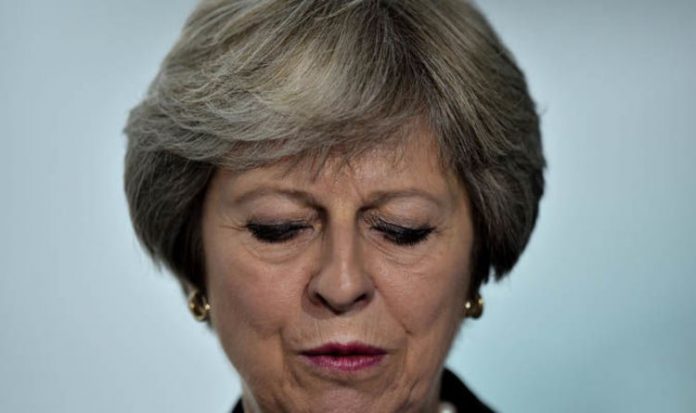 The prime minister was urged to refrain from running as leader of the Conservative Party in the next general election by MP George Freeman, who formerly chaired Ms May’s No10 policy board.

Despite defending the “extraordinary job” done so far by Mrs May, Mr Freeman believes she isn’t the right person to lead the country after the withdrawal from the bloc.

Speaking at an event in London hosted by The Times, he said: “Let me be clear. The PM has done an extraordinary job to make the best of an appalling legacy.

“She deserves the gratitude of a nation which was rudderless in June, 2016.

“She deserves the chance to honour her promise and deliver our departure from the European Union on March 29.

“But the shape of our future must be forged by a new leader.”

In his vision, the Tories will have to find their next head among those Conservative MPs who are “liberated form the poisonous politics” of the EU referendum and the “shambles” that followed, Mr Freeman explained.

He added: “Anybody who was involved in that referendum campaign – they carry the baggage of that terrible process.

“I think we need a new energy, new direction, a new generation leader to take this forward, backed up by the talent that we’ve got.

“If I was still advising Theresa May, my advice would be to frame it in those terms – seal the deal for a new generation and hand the torch of responsibility on to them and I think the country would cheer.”

However, the former adviser clearly stated Mrs May should be given the chance to deliver what she was promised, a clean Brexit.

The prime minister’s former adviser stood down in November 2017 after clashing with Mrs May on the direction they believed the party needed to take.

Mr Freeman’s comment on the political future of the prime minister comes as hard-Brexiteer Jacob Rees-Mogg is leading an open revolt against Mrs May.

Mr Rees-Mogg and other 50 Tory MPs reunited in the European Research Group (ERG) are said to have openly debated how to topple Mrs May in a parliamentary committee room.

And they introduced the possibility to trigger a vote of no-confidence, which would require the support of 48 Conservative MPs.

But Brexiteer Michael Gove dismissed the revolt as “loose talk”.

“There are always people who want to write stories about leadership speculation.

“The critical thing is to ensure that we deliver on that Brexit mandate.

“Any diversion or any distraction from that mission means that our ability to ensure that the referendum mandate that we were given is delivered, is undermined.”