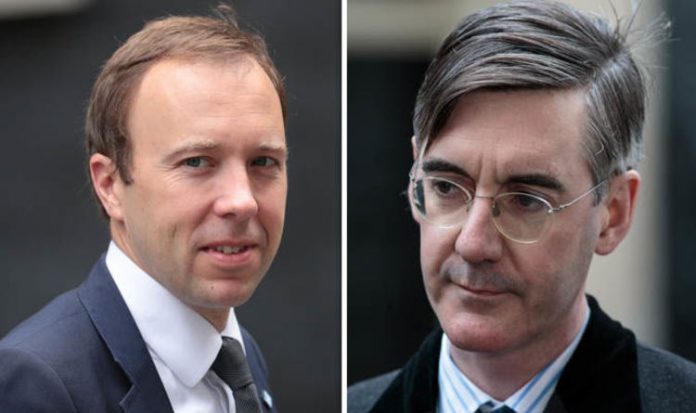 Speaking in front of the Health Select Committee on Tuesday, Mr Hancock said: “I’ve asked the department to work on options for stockpiling by industry and we are working with industry to prepare for the potential need for stockpiling in the event of ‘no deal’ Brexit.”

Defending this position, he added: “This is exact type of contingency planning that you’d expect.”

“I spoke to one source in the European Research Group (ERG), the main Brexit group, who said Matt Hancock’s remarks this afternoon were weaponising the ‘no deal’ preparations.

“ERG sources are now saying, from what I heard today, that this is Project Fear 2.0.”

Arch-Brexiteers accused the minister of raising fears surrounding a ‘no deal’ outcome in order to gain support for Theresa May’s ‘soft’ Brexit proposal, which could lead to the Government offering further concessions to Brussels.

Highlighting the level of anger within the ERG, Mr Watt said: “They are saying that what they heard this afternoon was very cynical.”

Speaking in the House of Lords, he said: “I am not aware of any plans for stockpiling food.

“It seems to me to be a fairly ridiculous scare story.

“There are many countries outside of the European Union that manage to feed their citizens perfectly satisfactorily without the benefit of EU processes.”

The Health Secretary expressed his confidence the Government will be able to strike a viable deal with the EU following Brexit, but noted he was working to ensure that people’s “health will be safeguarded in the event of ‘no deal’ Brexit”.

Dr Sarah Wollaston, Conservative MP and Chair of the Health Select Committee, supported Mr Hancock’s statement and underlined the need for clear contingency planning in the event of a ‘no deal’ Brexit.

Speaking on BBC Newsnight, she said: “We need to be planning in advance of how we could step up obtaining those supplies form elsewhere if needs be.”

She warned that unresolved customs issues could jeopardise the transfer of key medical supplies and equipment between the UK and the EU post-Brexit, and in particular those with short shelf-lives and complicated storage requirements.

In a stark warning, she concluded: “We need to be very clear that there could be potential problems here.”