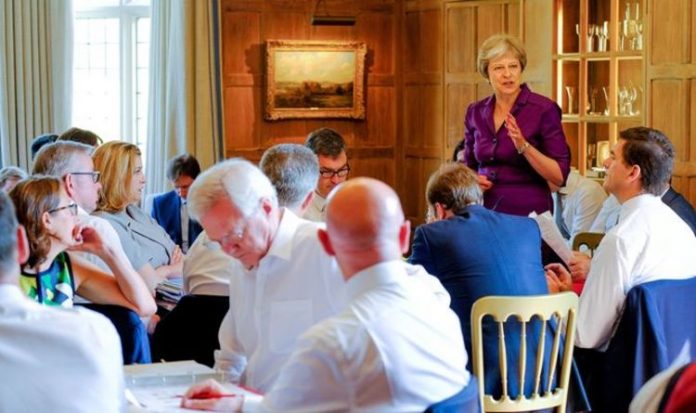 Party grandees are warning Conservatives will look like they “don’t care about ordinary people” following the publication of Friday’s 12-point Brexit blueprint.

Brexiteer Cabinet ministers who voted for the Chequers proposals have been branded “traitors.”

One source said voters who feel betrayed could strike back at the ballot box and inflict a defeat like John Major’s 1997 fall to Tony Blair.

It is feared by many backbenchers that Mrs May has blurred her so-called ’red lines’ with her latest Brexit fudge, with Jacob Rees-Mogg querying if they had now turned pink.

Mrs May is set to face the influential 1922 Committee on Monday, with Eurosceptic backbenchers expected to confront her over the manifesto.

Some see their decision as motivated purely by self-interest and a desperate bid to cling on to their jobs.

One senior MP told the Sunday Telegraph: “Brexiteer ministers have put their careers before their country. They are traitors to the nation.”

Michael Gove was branded “the main snake in the grass” after the vocal Leave supporter backed Mrs May’s blueprint during Friday’s 12-hour Cabinet summit at Chequers, with Boris Johnson also criticised for not resigning.

During heated talks, leader of the Commons Andrea Leadsom expressed her fears that Remain supporters in the Party were making key decisions during Brexit talks.

Mrs Leadsom warned that the views of the electorate should not be ignored.

It comes amid mounting concern in Conservative ranks over Mrs May’s blueprint.

Brexit Secretary David Davis told Cabinet her “common-rule book” scheme  over industrial and farming products would be seen as Mrs May backtracking on her promise to wrestle back control of the UK law book from Brussels.

Mr Duncan Smith said: “If the public perceive that not to be delivered, then the government, I’m afraid, will suffer the consequences at the next election.”

Mrs May has previously vowed that the UK would exit both EU structures once Britain left the single bloc.