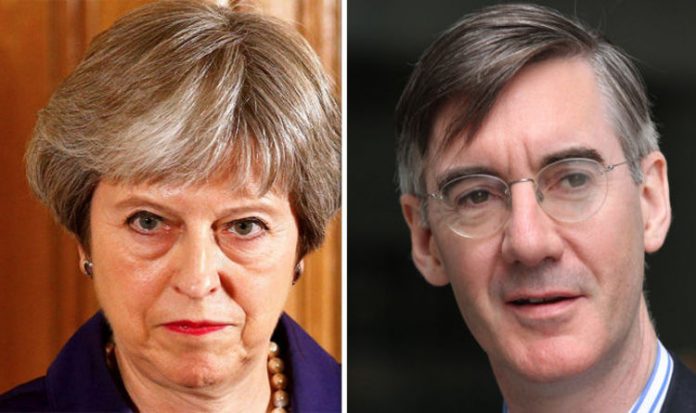 The European Research Group (ERG) led by Mr Rees-Mogg want to amend the Prime Minister’s Trade Bill as they claim the Government has “broken their trust”.

One amendment demands the UK does not collect taxes on behalf of the EU unless EU member states do the same.

The second amendment, concerning the Irish Sea, has been backed by the DUP and Labour’s Kate Hoey.

It is very significant that Mr Rees-Mogg has won the backing of the DUP for one of the amendments as the Northern Irish party had promised to support Mrs May’s government in confidence votes and Brexit policy after the Conservatives needed their support to get a majority in the 2017 election.

“I believe this will help the Government stick to the promises it made.

“It may resolve the dilemma the Prime Minister faces. Does she rely on Labour votes to achieve Brexit or does she change her mind and go back to Lancaster House. Will she stick to her earlier words?”

The MP for North East Somerset praised the resignation of David Davis and Boris Johnson and said they had “courage in giving up their Cabinet seats”.

The former Brexit Secretary and Foreign Secretary stepped down from the front bench on Monday after Mrs May’s Chequers summit last week which saw ministers agree a ‘soft Brexit’ plan.

Before the Chequers meeting, Mr Rees-Mogg said: “Any EU agreement that restricts the country’s ability to make trade agreements with other states, restricts our ability to control our migration policy, makes us pay to trade or interferes with our fishing waters could not be accepted.

“The Cabinet should agree that if there is to be a deal it has to be agreed in detail prior to our departure.”

The Prime Minister has already received a letter of no confidence by the MP Andrew Bridgen who launched a scathing attack against the leader.

In a letter to Sir Graham Brady, chairman of the Conservative Party’s 1922 Committee, he wrote: “All we have asked from the Prime Minister is that she sticks to what she has promised on repeated occasions when she declared that ‘Brexit means Brexit’ and pledged to take back control of our money, borders and laws”.